"A Moment of Pure Grace" 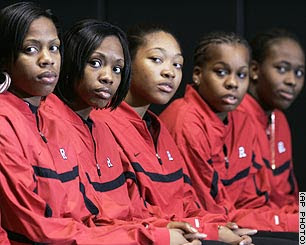 A special mid-week post from Roxie's World because the fallout from the Imus imbroglio continues--and the lessons of this "teachable moment" become clearer. Today, the glorious women of Rutgers talked back to their tormentor and publicly addressed the tumult that has taken over their post-season. They held a press conference to announce that they plan to meet privately with Mr. Imus to hear his explanation for his reprehensible conduct. Essence Carson was chief spokesperson for the team, and she spoke movingly of the incident and the media firestorm it has generated. She noted that Imus's assault had "stolen a moment of pure grace" from the team, which didn't get nearly as much attention for its prodigious accomplishments on the court this season as it has gotten for being the object of a vicious verbal assault. Her remarks demonstrated a shrewd understanding of the role of money in American culture and of the lingering effects of racism and sexism. Asked to say whether she felt more injured by the racism or the sexism of Imus's remarks, Carson refused to fall into the trap of pitting one against the other. "Both," she said simply, offering a small but astute example of what feminists describe as intersectional analysis--i.e., an analysis of oppression that attends to the multiple, interlocking social forces that contribute to the marginalization of individuals and groups. (Moose had to explain that part to me. See previous post for reference to bell hooks and my point about Roxie's World not being an academic blog.)

Here are a few links to new stuff on the Imus mess:

Moose is struck by the fact that the homophobia of Imus's remarks--which is so evident in the contrast he sets up between the "rough girls" of Rutgers with their tattoos and the "cute" girls of Tennessee--is getting little to no attention in the flood of commentary that has been unleashed in the past week. She thinks this underscores a broader problem of homophobia in the perception and reception of women's sports. She's even thinking of writing up a little something about it if she gets a break from typing for me or--oh, yeah--doing her day job.

While Moose ponders that weighty subject, I have one thing to say to the extraordinary women of Rutgers:

No one can take that moment of pure grace away from you. It is yours forever. You purchased it with your fierce dedication, your unyielding faith in yourselves and your team, and in the sheer beauty of your athleticism. No washed-up celebrity jerk can steal it or tarnish it or even touch it, for it lives in your souls and in the hearts of all of us who thrilled in your accomplishments throughout the season and in the tournament. You are pure grace--in word and deed. Whatever the score of any game, you are winners--plain and simple.