We're sorry to bump the heart-warming Sad Boy with Dog photo from the top of the blog. Scroll down to the previous post if you haven't seen it yet. Download it to your desktop. Click on it once a day to remind yourself that life is worth living as long as you've got something to snuggle. Dogs are pack animals. We have a powerful bias in favor of snuggling, but so, apparently, do a lot of people. No less an authority than the poet Adrienne Rich has waxed eloquently on the subject of snuggling:

a touch is enough to let us know
we're not alone in the universe, even in sleep
--"Twenty-One Love Poems" (XII)

But we're not sleeping on the job here in Roxie's World, kids. I feel your restless fingers out there, clicking around in search of fresh content, so I've had my nose to the ground looking for a story that would make my legions of loyal fans sit up a little straighter in their desk chairs. (You shouldn't be slouching anyway, you know. It's not good for your back.) Our crack team of newspaper readers and internet crawlers went all the way to the breakfast nook this week to catch the Washington Post in a major factual error, and we decided to break the news right here in Roxie's World. Yes, it's true. Today you get not just snarky or sentimental commentary on news, events, or basketball. You get the truth -- and it's a truth that involves cucumbers and green food coloring. How many dog blogs offer you that? 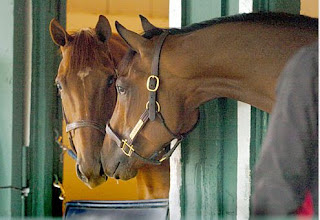 Permit me to explain. This coming Saturday (May 5) is Derby Day -- the day on which the 133rd Kentucky Derby will be run at Churchill Downs in Louisville, Kentucky. Moose, as the loyalest of my loyal fans know, was born in Louisville and grew up just across the Ohio River in New Albany, Indiana, which is not nearly as glamorous as it may sound. Nonetheless, Derby Day was a very big deal in the social life of the town. Moose's family never went to the race, not being of the horsey set, but there was always a party, and the party always involved excellent snacks, copious drinks, and hours of collective effort trying to spot Cora Jacobs, a prominent local realtor, in the crowd at Churchill Downs in a large hat. Moose's family left New Albany in 1970, but they took the tradition of the Derby Party with them as they moved ever further northward in Indiana. So devoted were they to the cause of the Derby celebration that when word came one Derby morning that Moose's great-grandmother Mimi had died down in New Albany, the party went on. Mimi, everyone agreed, would have wanted it that way.

I digress. Every year around this time, newspapers and magazines not located in Louisville run stories on how to host a Derby party of one's own. The stories, which usually rely on the advice of a transplanted Louisvillian, always offer tips on what to serve (mint juleps), what to wear (the aforementioned hats), and how to set up a betting operation. For the record, Moose has never had a mint julep, but that may be because her grandmother was a teetotaler and her father was a beer drinker. The Post ran its story in the Food section this past Wednesday. (Here it is.) At first, Moose just rolled her eyes at the small bits of misinformation (the claim that local schools close for Derby Day -- when the Derby is and always has been run on Saturday) and the strange menu suggestions (Hot Browns are delicious, but they are more suited to a winter buffet than a celebration of spring). However, when her eye fell upon the recipe for Benedictine, a glorious green dip that has been served in her family for five generations, she choked on her coffee. You would have thought she'd just read that Bush's plan to get out of Iraq was to send more troops to Iraq.

Here's the thing. The Benedictine Moose slathered on the Ritz crackers of childhood and the Wheat Thins of adolescence was one of the simplest things in the world. It consisted solely of:
Mix all ingredients together. Chill and serve with crackers or chips. Moose recommends Wheat Thins for excellence in dipping and that hint of salt, but some branches of her family prefer Pringle's potato chips. You know who you are, and you've been leaving broken bits of potato chips in the Benedictine for decades. Benedictine is also an excellent sandwich spread, by the way. Moose used to have it on white bread in her school lunches. One of the nice things about going to school in New Albany, Indiana is that the other kids didn't think she was weird for eating sandwiches made with green cream-cheese spread. You could buy Benedictine in the grocery stores in the Louisville area back then.

The recipe printed in the Post is an abomination of this elegant ideal. The local informant featured in the story adds mayonnaise, sour cream, and dill to the recipe, and, most shockingly, she omits the green food coloring! Moose wishes to make one thing perfectly clear (as she did in the indignant letter she wrote to the Food section on Friday): If it ain't green, it ain't Benedictine. That little dash of green is essential to this simple, delicious dip. The visual cue supplied by the color helps to bring out the flavor of the cucumber (even better than the salt added to the Post's version of the recipe), and on Derby Day it reminds party guests of the lush green grass of the infield at Churchill Downs. Leave out the food coloring, and all you've got is a boring party dip. Put it in and you've got a poem to spring.

Mind you, though, kids, you just want the tiniest drop of green in your Benedictine. If you overdo, it becomes a day-glo green that most folks are scared to eat. Except for Moose, of course.

To calm Moose's nerves from the shock of seeing a childhood ideal publicly perverted, Goose reminded her of the many horrors of the Guacamole Wars (with or without tomatoes, with or without sour cream, etc.). For the record, we are also purists on the subject of guacamole, though Moose will sneak in the tiniest pinch of salt if the avocados aren't at the peak of flavor. She says the secret to perfect guacamole is to make love to the avocado -- by which she means to touch it lightly and not glop it up with a bunch of other ingredients that get in the way of the wonderful flavor of the avocado. Moose, as I have said many times, is weird, with or without green cream-cheese spread on her sandwiches, but even the native Texan in our household lets her make the guacamole. She makes the finest guacamole in all the world.

Here are some other things you should be dipping into in the lovely days of late spring, as the Bush administration slowly crashes to the ground:

Go take a walk, boys and girls. With or without a dog, it's a beautiful time for strolling and dreaming and dipping your toes into cool deep streams of thought.

Update: Take a listen to this NPR piece on the Derby by transplanted Louisvillian Laura Lorson, who mentions Benedictine but does not divulge her recipe for it.
Posted by Roxie Smith Lindemann at 3:31 PM