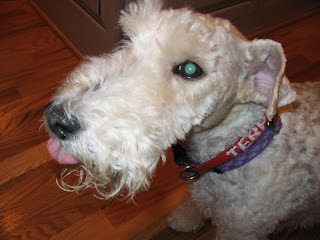 (Photo Credit: Probably Moose, but we're not sure. That's definitely me, though, proudly sporting my Terps collar.)

Today is my thirteenth birthday. I know my legions of loyal fans are well aware of that fact and have probably been celebrating the occasion for hours. (Please do so responsibly. You know how I worry about you.) I mention it for the benefit of newer denizens of Roxie's World, who may not as yet have absorbed all the details of my biography. Since today caps off the series of early spring birthdays and anniversaries we celebrate around here (Moose & Goose's 23rd anniversary on March 8, the first anniversary of Roxie's World on March 12, Moose's birthday on March 27, and my birthday), Moose and I have decided to sit down for one of those taking-stock type of interviews. You know, the kind of thing you see when world leaders are commemorating some milestone or celebrities have just gotten out of rehab. This will give Moose the opportunity to play the role of Girl Reporter that she played for many years of her misspent Midwestern youth. And it will give me the opportunity to pop off about the subjects nearest and dearest to my leaky heart: mortality, politics, pop culture, and basketball. Enjoy!

Moose: So, Rox, you've had quite a year--a couple of significant health challenges (an episode of congestive heart failure, a nearly fatal bout of pancreatitis), a whole new career as a blogger, all that concern about your fish when the pond was frozen over. What would you say the highlight of the past year has been?

Roxie: Our new couch. It's amazingly comfortable. Plus, I love the fact that there are pillows in the corners. Those greatly enhance my snuggling options. As you know, the couch is where I do most of my work, since it's the ideal spot for watching our big plasma TV or for listening to you and Goose spout off about whatever you're reading in the Times or the Post. It's my observation post, if you will. I curl up there and even with my eyes closed I can closely monitor the delightful antics of Homo sapiens. I'm also close enough to the back yard to be able to keep an eye on the squirrels and my fish, which is another important part of my job. I am, after all, a dog.

Moose: I'm sure your fans are curious to know something about your creative process. How do you decide what to blog about? What makes a story right for Roxie's World?

Roxie: That's a hard question. Unlike humans, I don't tend to think much about what I do. I just do it. Dogs are the only true existentialists, you know. We are also curious creatures and terriers are bred to hunt, and I think those qualities find their way into Roxie's World. I write about whatever captures my attention--whether because it amuses me or infuriates me or makes me want to get up off the couch and do something. I respond to the things that move me, whether it's events in our household or events in the world. One of my favorite posts is the one called "Stink Bombs," which combined my outrage over the hypocrisy of Mary Cheney (a lesbian who campaigned for the homophobic administration of which her father is a part) with the story of an airplane brought down by a fart (because a woman passenger had lit matches to conceal the embarrassing odor). It takes the sensitive nose of a dog to pick up on the connection between these two stories. That's what Roxie's World is here for.

Moose: I'm wondering if you'd care to comment on this cartoon, which was sent to us awhile ago by our good friend Matt Kirschenbaum (who blogs here): 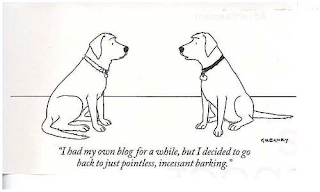 Roxie: Well, it's amusing, of course, and I'm always pleased to see images that connect dogs to the technologies of mass communication, but I reject altogether the false choice the cartoon sets up between blogging and pointless, incessant barking. I do both and find that each is essential to the full, rich life of a dog. You humans are such black-and-white thinkers, so prone to framing things in such stark, dichotomous terms. Frankly, I think you'd be much better off if you'd loosen up some, try seeing things in "both/and" terms rather than "either/or."

Moose: Tell us what's on your mind right now. What would you be blogging about if you could get me to quit my day job to type for you 24/7?

Roxie: So many subjects, so little computer time. Well, it amazes me that I haven't weighed in yet on the broohaha over the firing of the U. S. attorneys. If my tech assistant were more savvy, I would have installed a "Countdown to the Resignation of Attorney General Alberto Gonzales" on Roxie's World by now. Or maybe we should figure out a way to keep track of all the rats deserting the sinking ship of the Bush administration. The New York Times had a wonderful story this week on Matthew Dowd's loss of faith in the president he served as a chief campaign strategist. On the other hand, I would also like to spend some time celebrating the good things that have already resulted from the Democratic takeover of Congress: greater transparency and accountability in government, new attention to the crisis of global climate change, a vote by both houses to set a deadline for starting to bring troops home from Iraq. It really is astonishing. I hope we'll never again hear people try to claim that elections don't matter or that there's no difference between the two major political parties.

I've also been very moved by the courage of Elizabeth and John Edwards in announcing that her cancer has returned but that they plan to continue his campaign for the presidency. (Frank Rich has a terrific piece on Mrs. Edwards and the role her unflinching honesty about life and death may play in the campaign.) Mrs. Edwards isn't just a role model for people coping with incurable diseases. She reminds us that mortal creatures never know how much sand is left in the hour glass. We should all embrace each moment as fiercely and tenderly as if it were our last--because it might be.

Moose: And from pop culture? What's got your attention there?

Roxie: I was pleased to see that we could watch The L Word without cringing this season. When we laughed, it was usually because the writers wanted us to and not because what was happening on screen was just flat-out ludicrous, though you and Goose insist the show features a lot more work-place sex than occurs in the life of a typical lesbian. Still, I enjoy watching the show with you guys, probably for the same reason you like watching dog shows with me. We all agree that lesbians and dogs are enormously entertaining, and we don't see nearly enough of them on TV. Also, I loved the characters played by Cybill Shepherd and Marlee Matlin and hope they both come back next season.

Moose: And basketball? March Madness isn't over yet.

Roxie: We're still rooting for Rutgers in the women's tournament, though we're sorry they're up against LSU in tonight's semifinal. We've been pulling for LSU, too, because we're not convinced that Coach Pokey Chatman was treated fairly when she was run out of Baton Rouge over vague allegations of a relationship with a former player. (Elizabeth Merrill has a good piece on all we don't know on the Chatman story on ESPN.com.) Now that Georgetown is out of the non-women's tournament, we don't really have a dog left in that hunt, as it were. My Auntie Faye in Tulsa is pulling for Ohio State, so perhaps we'll tilt a bit in their direction. We want the Official Radical Militant Librarian of Roxie's World and The Stephanie Miller Show to be happy, after all. (Auntie Faye blogs here.)

As for our beloved Terps, well, we're just waiting for next year. Coach B was featured in an offbeat little human interest piece in The Baltimore Sun the other day in which we learned that she likes Starbucks, Swedish massage, and Spider Man movies. No word on where she's planning to go to pick up a defensive strategy for next season, but, hey, she's got plenty of time to think about that.

Roxie: Thanks, as always, to my legions of loyal fans for being there. Remember the motto of Roxie's World: What Would Molly Say? That's our tribute to the late, great Molly Ivins, whose rapier wit and indomitable spirit never deserted her. Don't let the big dogs scare you or silence you or make you think you don't have power. When they bark, bark back. When they bite, bark louder. Run with a pack, and no one can beat you.

Email ThisBlogThis!Share to TwitterShare to FacebookShare to Pinterest
Labels: basketball, blogging, cultural studies, my moms, pictures of me, politics