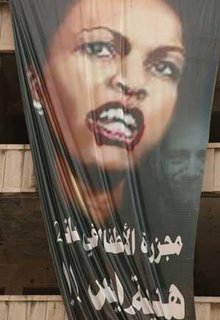 Regular readers of Roxie's World know that my moms are English professors. That helps to explain why, for a dog, I have an unusual interest in matters related to language. Being a political animal, I am especially interested in how battles over names, meaning, and interpretation play out in the public sphere. Thus, my ears pricked up into full terrier alert mode this week when I heard Moose grousing at the breakfast table that Republican National Committee chair Ken Mehlman had decided, in the wake of Ned Lamont's victory over Joe Lieberman, to start calling the opposition party "Defeat-ocrats." The RNC even put out a web video called "Weak and Wrong: Meet the Defeat-ocrats." Watch it at your own risk and with a barf bag close at hand.

Moose and I are wondering if the term will catch on as a desperate GOP tries to cling to power by Swift-boating anyone who dares question Bush's war strategies. We expect to hear loud, lusty Republican choruses of "Defeat-ocrat, Defeat-ocrat," punctuated by a trio of female back-up singers going "cut and run, cut and run, who's gonna cut and run?" We've decided the only way to survive this onslaught is to offer up one of our own, so we've spent the whole weekend coming up with clever, demeaning labels for Republicans and all the nasty things they stand for. Here are the videos we think Dems should roll out come September:

Moose came up with some other fun possibilities, but I'm not sure how much traction they'd be likely to get. She thought we should propose calling Republicans "Stay-the-Course-icans" and "Heckuva-job-icans," and she's quite fond of the phrases "Axis of Idiocy" and "Axis of Ineptitude," which already turn up on Google searches. I think we should keep it simple, though, and constantly call listeners' attention to the squalid underside of the Republican "brand." Let us know what YOU think, gentle readers.
Posted by Roxie Smith Lindemann at 3:13 PM