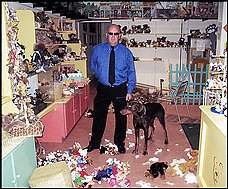 Uh-oh, I bet this big fella is in trouble! The dog in this picture is Barney, a six year old Doberman pinscher who was supposed to be guarding a $900,000 collection of rare teddy bears at a children's museum in England. Instead, he decided to make a meal of them, going on a rampage and chewing up hundreds of the little darlings, including one that had been owned by Elvis Presley. According to The Washington Post, Barney "just went berserk" and ripped the head off Presley's bear (named Mabel), leaving piles of stuffing, heads, and limbs all over the museum floor. I, too, am a dog with a penchant for inappropriate snacking, and like Barney I have a special fondness for snuggly textile goods as well as socks and underwear. Lead me not unto temptation, I say. If you don't want the toys, blankets, or undergarments chewed up, then don't leave them where a dog can get them, and for heaven's sake don't leave a dog to "guard" them.

I am a little troubled by the media coverage of this incident, though. The story notes that Barney had to be wrestled to the ground to stop his rampage, but it says nothing about Barney's background or training, as most tales of somebody-run-amok usually do. It doesn't note, for example, any mitigating circumstance that might explain his loss of control. It fails to mention whether his sire was a known teddy bear hater who raised Barney to believe that teddy bears were to blame for many of the world's problems and therefore deserve to be ripped limb from limb. It doesn't even say whether his mother was, well, a bitch.

Dogs just don't get a fair shake in the human-stream media, folks. You may love us, but you don't understand us. That's why Roxie's World is here.
Posted by Roxie Smith Lindemann at 4:45 PM