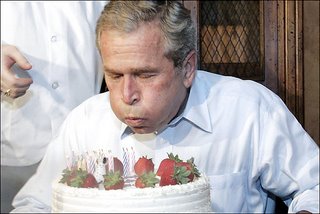 Moose and Goose were sitting on the couch last night, drinking cold beer and watching TV when a story on the president's annual physical came on the news. As you can imagine, it didn't take long before they were spitting their beer across the great room and ranting about how "World War III is breaking out and yet there's room in the news for the president's cholesterol level?" "Why do the media fall for this every damn year, touting Bush's physical condition as if it were a virtue that somehow made all his obvious failures and liabilities irrelevant? It's this little report card they hold up every year to prove what a very good boy he's been." And, of course, "If he's so darn fit, why don't they give him a gun and send him to Iraq? Or Lebanon? Or any of the other war zones he's managed to create?"

You can't blame Moose and Goose for being a little bitter. Yesterday was the fifteenth anniversary of Moose's father's death. Bush turned 60 a few weeks ago, which was Frig's age when he died, so the minute details of the president's astonishingly good health couldn't help but rankle. (Moose started calling her dad "Frig," by the way, when she realized he used that word to avoid offending her mother by lapsing into vulgarity in front of the children. Moose has always been a great fan of vulgarity and, like her father, has never been very good at hiding that fact from children.)

However, in the midst of all the happy data about Mr. Bush's resting heart rate and low blood pressure, one under-reported bit of information confirms what many observers of the administration have suspected for quite some time: The president is shrinking! According to a report in The Washington Post, Bush is a quarter-inch shorter than he was in last year's physical. He now stands at 5 feet 11 1/2 inches, which makes him two and a half inches shorter than his father, two inches shorter than Bill Clinton, and half an inch shorter than Eleanor Roosevelt. Interestingly, the president is still five inches taller than his secretary of state and at least an inch and a half taller than his vice president, though reports of Cheney's height vary, which is in keeping with the aura of deep secrecy the veep strives to maintain.

How much smaller can the president become? Of the accidental slaughter of dozens of Lebanese children, he says merely that it is "awful." On what actions might be taken to end the killings, he suggests that others should make phone calls and "make something happen." He appears to believe that having someone else say "stop this shit" is a meaningful way of fighting his "war on terror."

Heaven help us if this president gets any smaller.
Posted by Roxie Smith Lindemann at 3:45 PM

Email ThisBlogThis!Share to TwitterShare to FacebookShare to Pinterest
Labels: my moms, Shrub