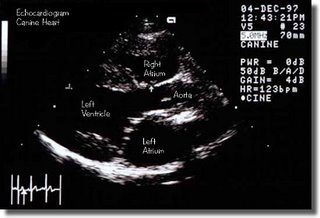 No, my title is NOT a tasteless reference to the recent trials and tribulations of actor Mel Gibson. It is a happy reference to my recent trip to see my cardiologist, Dr. Braz-Ruivo. He did an echocardiogram on my heart (similar to what you see in the image at left) and declared that my heart disease has not gotten any worse since he last saw me. That is great news. It vindicates my moms' decision to take me off Lasix, which, you may recall, everyone in our household hated (because it made me lethargic and incontinent). The doctor was a little upset when he first heard I had been off it since May, but after he saw the echo he said, "Well, I never intended to keep her on Lasix permanently, of course."

We like Dr. Braz-Ruivo a lot. He has a sweet voice that bubbles with laughter and a Portuguese accent that makes everything sound pretty. He always remembers that my moms teach English and tilt to the left politically. I don't like all the yucky procedures he makes me endure (as a bonus yesterday, for example, I even had to get my toenails trimmed, which I hate), but it's kind of pleasant to lie on a table in the dark and listen to him and my moms tell stories and jokes while pictures of my heart flash up on his computer screen. He has a really nice assistant named Linda who holds me while the machines are doing their work and gives me treats afterwards. My moms pet my face and tell me what a good dog I am. Sometimes that calms me down. Sometimes I do my terrier trembling thing, but all that love does a heart good. The echo proves it!

For now the doctor says just to keep doing what we're doing, and we'll re-assess again in six months. Sometimes "staying the course" really is the wisest thing to do. And sometimes, alas, it isn't. More on that soon, but for now let's put our paws together and celebrate two things: my good report and my big brother Geoffrey's 35th birthday. Happy Birthday, Sweetie Boy!!!!
Posted by Roxie Smith Lindemann at 2:45 PM

Email ThisBlogThis!Share to TwitterShare to FacebookShare to Pinterest
Labels: health, my heart