Give Peace a Chance 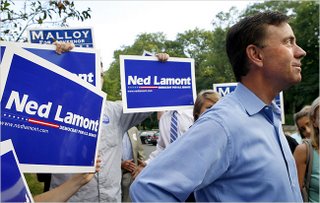 Ned Lamont wins in Connecticut! Joe Lieberman proves that he is a sanctimonious, disloyal jerk by immediately announcing that the voters' desires matter less than his. He will run as an independent.

Message for Dems: Run for peace. Run with the people. Run for energy independence and health care and civil liberties and a new course of action in foreign policy. Run away from Joe and the Democratic Losership Council. Run with Ned!

Here's a good piece on the implications of Lamont's victory and Leiberman's selfish course of action. Roxie's World would declare Lieberman an official bad dog if we hadn't already used that title twice in recent weeks.

Feel like jumping on the Lamont bandwagon? Here's Lamont's website. Send him a check. He'll need it if he has to fight off TWO Republicans in the general election.
Posted by Roxie Smith Lindemann at 11:45 PM