Ruth Stone, who died November 19 at the age of 96, was a friend of ours. By friend we don't mean we spoke on the phone every day or spent summers at her charmingly decrepit Vermont farm house. Indeed, we hadn't spoken in several years before the National Book Award-winning poet passed away. The friendship we claim is rooted in the depth of our affections, not the amount of time we spent with a fine poet and a feisty woman who toiled in obscurity for decades. We loved Ruth, and she loved all the denizens of Roxie's World. 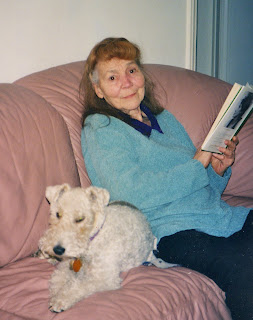 To Ruth, everything on earth was intensely alive -- full of meaning and worthy of recognition. Thus, in "Vegetables II," she says of an eggplant she contemplates eating, "We put our heads together. / You are so smooth and cool and purple, / I say. Which of us will it be?" In the early days of their friendship, when the Moms were cat lesbians, Ruth would inscribe copies of her books to them and their cats, Spike and Lily, illustrated with adorable little cat cartoons down by her signature. When I came on the scene in the mid-90s, Ruth laughed uproariously at the wild antics of my exuberant puppyhood, but, as the photo anchored to this paragraph shows, she could also calm me down enough to curl up and enjoy some poetry. (Ruth is reading a volume by another of our beloved poet-friends, Alicia Ostriker, in this picture.)

Goose first met Ruth at an epic lady poet-palooza held in May of 1986 to commemorate the centennial of Emily Dickinson's death. Upon that occasion, Ruth spoke movingly of Dickinson's astonishing originality and of the conditions in which her poetry was produced. Much of what she said of Dickinson might have been said of Ruth, too:


When I read her poems, these original, hard as steel poems, and I feel the intensity in every word, words used in new ways, bent to her will, then I think she was self-sufficient, an artist whose mind was never asleep, whose concentration recreated, made fresh all that she saw and felt, as though she saw through the ordinary barriers, not as a visionary, but as a laser beam. But when I think of how little recognition she received in her lifetime, and how devastated she must have felt, though her fierce pride concealed it, then I am angry and sad. Yes, a great artist knows and can work in almost total isolation, but it is a terrible thing to have to do. The original mind seems eccentric, even crazy sometimes. In her cryptic inventions, she broke the tiresome mold of American poetry. We still stand among those shards and splinters.

The original mind seems eccentric, even crazy sometimes. Oh, maybe just a little. Moose's favorite Ruth story involves an afternoon in the late-80s when Goose was at school and she and Ruth were hanging out with the cats in the apartment they lived in back then. Moose was supposed to be working on her still unfinished dissertation. Ruth was supposed to be resting to get ready for an evening reading on campus. At some point, Moose tuned in to the sound of Ruth's voice. Out in the living room, she was muttering something about death. "Oh, dammit. Oh, death," or words to that effect. When Moose ventured out to see what was happening, Ruth was sitting on the couch staring at her hands. "Ruth?" Moose shyly inquired, for she barely knew her elderly houseguest. "Everything okay?" Ruth turned to her, with her large brown eyes open wide, and declared, "Death is after me. Ever since that car accident. I knew it. Dammit." "Uh, okay, Ruth. What makes you think that?"

At that point, America's most obscure great poet held out her hands so Moose could see them. They were bleeding. Not from any visible wound, mind you -- Just bleeding. Two thoughts immediately popped into Moose's dissertation-enfeebled mind. The first was something like, Cool, stigmata -- We can turn this joint into a religious shrine and retire our grad school debts by charging the pilgrims to get a look at Ruth's hands! The second was no less selfish but a little more paranoid: Oh, great. I'll be a footnote in the next edition of the Norton Anthology of Lit by Women: Stone bled to death while Moose agonized over her paradigm-shifting analysis of Sarah Orne Jewett's "An Autumn Holiday."

Then Moose got a grip. She asked Ruth a few questions and quickly ascertained that the poet, lacking health insurance, had likely been overdosing on aspirin to treat neck pain from a recent car accident. She had also been subsisting mostly on candy bars during the long bus trip from Vermont to Maryland. Moose figured the bleeding had to be a side effect of the aspirin and the diet. She fixed Ruth a sandwich and they spent the rest of the afternoon playing with the cats. That night's reading was a spectacular success. Strange postscript to the story: The Moms had a ratty old cloth couch back in those days. Ruth's hands left a couple of blood stains on the couch that never faded. Swear to dog, kids, those stains looked as fresh and bright on the day that couch was finally hauled out to the curb as they did on a sunny afternoon when America's most obscure great poet scared the bejesus out of a befuddled grad student.

Here are Ruth and Moose on a bench outside the Folger Shakespeare Library during that same visit. They had gone there with Goose to see an amazing exhibit of Marianne Moore materials from the Rosenbach Museum and Library's Moore archive: 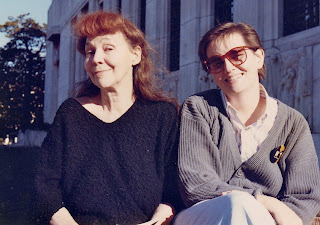 And here are Ruth and Goose on the same bench: 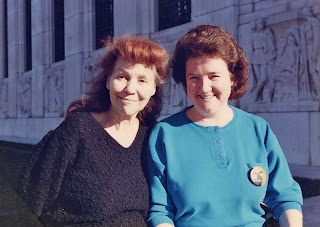 Oh, dammit. Oh, death. Oh, dammit, indeed. Damn you, death, for taking those we love from our midsts. Damn you for leaving us with nothing but echoes, shadows, fading images of nearly forgotten selves.

But thank you, Ruth, for the gift of your friendship and the consolation of your far from ordinary words. Thank you and dogspeed.
Posted by Roxie Smith Lindemann at 8:46 AM