This story caught my typist's eye this morning. A new study shows evidence of empathy existing "in a robust way" among rats. Here's how the experiment works: Two rats are hanging out in the rat lab. One is free and the other is in an "unpleasantly restrictive cage" that the other rat can learn to open if he wants to release his compatriot. The study indicated that, not only would the free rat liberate the caged rat, he would also save a treat from a horde of chocolate chips to share with the captive. Wait, dude: Liberty and chocolate? What planet are these critters from and how do we get there?

Wa Po summarizes the implications of the study:


The researchers came to the unavoidable conclusion that what they were seeing was empathy — and apparently selfless behavior driven by that mental state.

“There is nothing in it for them except for whatever feeling they get from helping another individual,” said Peggy Mason, the neurobiologist who conducted the experiment along with graduate student Inbal Ben-Ami Bartal and fellow researcher Jean Decety.

“There is a common misconception that sharing and helping is a cultural occurrence. But this is not a cultural event. It is part of our biological inheritance,” she added.

Also: Rats are not Republicans. Revise your political name-calling accordingly. Henceforth, rats are the good guys. As in: Oh, that Hillary Clinton is such a rat, running around telling everybody that gay rights are human rights! Get that girl some chocolate!

What a world, what a world. Have a lovely, rat-filled weekend, my pretties. Here's hoping your cage door opens soon. 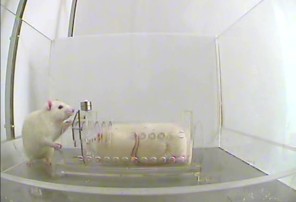