We love you so. No, really, we adore you and totally groove on the way you have become like the Global Queer-Affirming Good Girl. Srsly, the burly women and pretty boys of the world unite in saying that you are homolicious!

Nonetheless, with all due respect, we wish you would re-think the hair. I am sorry, Mme Secretary, but we cannot love a ponytail. 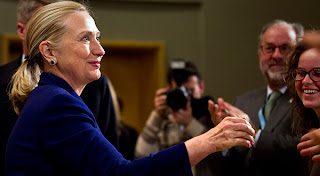 You go, girl. With you till the last dog dies. Or 2016, whichever comes first.
Posted by Roxie Smith Lindemann at 11:27 PM