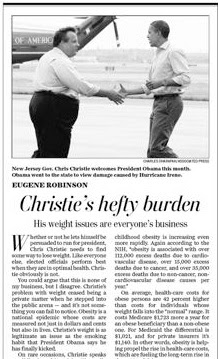 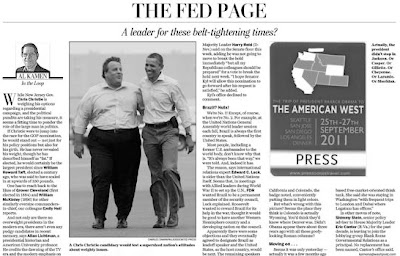 Look, kids, we're no fans of NJ Gov. Chris Christie, the tough-talking Republican who may or may not enter the presidential race. (That sad, squeaky sound you hear is the air going out of Texas Gov. Rick Perry's balloon.) We agree with esteemed Garden State political pundit Bruce Springsteen that Christie's tax cuts have had a devastating impact on the poor and the lower middle class, and we think the last thing the country needs is one more foaming-at-the-mouth tax hater.

Nonetheless, shame on WaPo for the double dose of fat hatred in this morning's coverage of Christie. Yes, the governor's size is notable and possibly newsworthy, in that his obesity could create health problems that would interfere with his ability to serve. Eugene Robinson notes in the column we screen-capped above that Christie was hospitalized this summer for asthma, a condition that can be worsened by obesity, and that the governor himself has acknowledged that his "weight exacerbates everything." A candidate's health is a legitimate issue, and Robinson is generally careful to frame his remarks in those terms. However, his snarky ending -- "I’d just like to offer [Christie] a bit of unsolicited, nonpartisan, sincere advice: Eat a salad and take a walk." -- along with the punny headline and the photo of the portly gov and the skinny-as-a-rail prez, tips the scales, as it were, in the direction of fat hatred. Especially when you consider that just three pages earlier Al Kamen's "In the Loop" column had run a very similar Christie/Obama photo to illustrate a few short pun-filled paragraphs aimed at "sizing up Gov. Christie's chances," as the headline on the web version of the story put it.

Sizing up: Get it? Belt-tightening: Hilarious, yes? A fitting time: Harharharharhar! The biggest loser: OMG, I am ROFL!

OK, technically, I am not ROFL. I am dead, and my typist is banging her head on the laptop screen thinking it's probably not just fat-hating and mean but also politically unwise of Dems and the so-called liberal media to start chortling and finger-pointing and making fun of the Wide Man who might want the Thin Man's job. A broad -- get it? -- section of the electorate is overweight, underpaid, and hopping mad right now. And lots of folks seem to be under the impression that the Thin Man may be something of a lightweight -- get it? -- when it comes to the brutal business of running the country. If this election turns on questions of physique, Obama's thinness may not be as much of an asset as the salad-eating media seem to imagine it will be.

Our advice and fervent hope? We wish good health to the governor of New Jersey, and we dream of a media mature enough to keep the focus on the truly weighty -- get it? -- matters facing the country.

Because, you know, their track record in that regard is. so. impressive.
Posted by Roxie Smith Lindemann at 1:16 PM