File this one under, It Isn't Even October Yet, and I Know It's Going to Be One of Those Semesters: 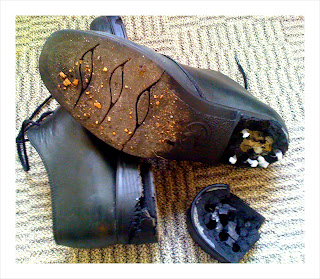 Moose had an 11 o'clock meeting this morning down in the Main Administration building at QTU -- you know, where such lofty personages as the president, the provost, and several dozen vice presidents of this or that extremely important thing nibble away at what's left of the soul of the institution do their extremely important work. Per usual, Moose was just a teensy bit late because she had spent the morning trying for the eleventy billionth time to figure out the new Facebook feed system rereading the beginning of Orlando for today's trans lit class. While getting dressed, she pulled an old pair of shoes out of the back of the closet, thinking they might look nicer with today's snazzy new outfit than her default work shoes. (Moose 2.0: She eats less and shops more.) She put them on and thought, "Oh, yes, much better than the clogs, comfy as those are." Away she went, feeling that extra little bounce a girl gets in her step when clothes and shoes are in happy harmony and every hair is more or less in place.

You know where this is going, don't you? Walk with Moose, as she makes her way down the long mall that comprises the bucolic heart of the QTU campus. It's a humid morning, so within a few minutes the good hair begins to wilt. Much more distressing, however, is that by the time she reached the bottom of the hill leading to the administration building, the bounce in Moose's step had become an awkward flap, flap, thud. She looked down and realized with horror that the heel of one of her shoes had come off. A small light flicked on in the back of her middle-aged mind. Oh, she thought, perhaps those shoes had been shoved to the back of the closet for a reason. Well, crap, now what? I still have to get to this %$&*#($ meeting! She picked up the broken heel, stuffed it in a bag, and hobbled into the meeting several minutes late. She greeted her assembled colleagues, pulled her phone and reading glasses out of her bag, and began -- surreptitiously yet frantically -- texting Goose, who, she hoped, was still at home. URGENT! she typed, hoping to grab her busy partner's attention.

Long story short: An hour or so later, as Moose trudged unevenly back up toward the English department, the heel on her other shoe started to come away from her shoe. Happily, halfway up the hill, she met Goose, who grinned and handed her the comfy and exceptionally durable clogs she should have put on in the first place. They chatted briefly, then Goose went down the hill to teach her class and Moose went up it to finish preparing for hers. Crisis averted, thanks to the miracle of modern communications technology and the incredible convenience of being a dual-career couple with the good fortune to be employed at the same institution.

Moral of the story? We believe Mr. David Cassidy put it best when he sang, in 1971, "I'll meet you halfway, that's better than no way." So true, Mr. Cassidy, so true. In life, love, and, um, footwear. Thank you, Goose, for saving the day. And you, my pretties? What's the takeaway for you in this amusing little slice of domestic/professional life? Wear sensible shoes, of course, and recognize that being well-heeled is not just a figure of speech. Peace out, darlings, and have a pleasant, meeting-free tomorrow.