Ten Years and a Day (or Two)

Or, Why We Failed to Blog the Tenth Anniversary of 9/11

Like our good friend Keguro, we have been "trying not to write" about what happened in the United States and in our neighborhood ten years ago Sunday. (Go read that post. Keguro is in Kenya right now and reflects eloquently on how location affects memory and on how the events of that day transformed foreignness in the U.S.) Tenured Radical kindly invited us to participate in creating a bloggy archive of 9/11 posts that she set up over at her place, but we failed to produce anything for the actual day.

A major factor in our muteness was simply shortage of time. The Moms were on the road this past weekend at a family wedding and didn't get settled back to home, hearth, and happy dog until late Sunday evening. The 9/11 anniversary was a focus of some conversation during the festivities, part of the way that long lost cousins reestablished bonds and a sense of what time and adulthood had made of folks once known primarily as fellow occupants of the kids' table at holiday gatherings. Still, most of the talk was happy, as suited the occasion: How's that brother of yours? . . . . I'd like you to meet my second husband. . . . . Holy crap, Mom's on the dance floor! . . . . Do come by for breakfast tomorrow before you take off, OK? We'd love to spend some more time with you. Oh, and there was a certain amount of commentary on Moose's weight loss and the girlie-girl ensemble she wore to the wedding. We'll give you just the smallest peek and trust you to imagine the rest: 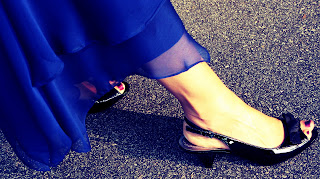 (Yes, we feel a little weird about putting that photo in a post even tangentially related to 9/11, but, well, some of the most serious bloggers we know post regularly about shoez, darn it, so indulge us just this once, will you?)

Another reason for our muteness in regard to the anniversary is that we did a commemoration post in 2008 that recounted the story of 9/11/01 in Roxie's World -- Moose at home, watching the horror unfold on TV, convinced when the Pentagon was hit that World War III had started and was practically in our ridiculously large backyard; Goose on campus, responsible for a work group comprised chiefly of students, ordered by the campus administration not to leave until the students were gone. That story and the feelings it elicits in us have not changed. It remains true that "the unimaginable can happen on an achingly beautiful autumn morning. The world can change in an instant. Individual lives can be lost, shattered, or merely transformed. And all you can say [by way of comfort] is, 'I know.'" What more needs to be said by a humble dog blog typed by a distracted English prof? Nothing, perhaps, but indulge us a little longer.

Moose could not bear to watch the few glimpses of the anniversary coverage she happened to catch on TV over the weekend. It was too much, she said, and it brought up too much sorrow, not only for what was lost on that beautiful morning ten years ago but for all the tragedies and nightmares unleashed in the wake and too often in the name of that morning. The visuals were just too intense. In the car, though, on the way to and from the wedding, the Moms kept the radio tuned to NPR and so heard much of its coverage, made bearable, perhaps, by the soothing voices and the absence of high-definition images of the World Trade Center towers gently -- or so it looks, in slow motion -- sinking to the ground.

And so it was that on their way out of town on Friday afternoon they happened to hear a story about the extraordinary efforts to rebuild and reopen the damaged section of the Pentagon within a year after the attacks. In the middle of the story, which featured Walker Lee Evey, a modest, genial-sounding fellow who managed the reconstruction project, they glanced out the car window and realized they were driving past -- the Pentagon. They marveled at that weird bit of synchronicity and went on their way. On the return trip Sunday evening, they listened to a selection of StoryCorps' 9/11 tributes and recollections. The stories are captivating, of course, recording with gut-wrenching specificity the individuality of lives lost and survivors struggling to carry on. They listened intently to one particularly powerful account by Beverly Eckert, whose husband Sean Rooney spoke to her for more than 30 minutes from the 105th floor of the World Trade Center until the collapse of the building cut off the call and his life. As Eckert's narrative ended, the dulcet-voiced reporter picked up the story -- with the tragic update that Eckert, who became a prominent advocate for those affected by the attacks, was killed in a plane crash in 2009 while flying to an event to honor her late husband. Both Moms gasped as they took in that painful detail, and as they struggled to absorb it the car rounded a curve -- and there again, across several ribbons of highway and in the soft light of a sweet late-summer evening, was the Pentagon.

The Pentagon is about ten miles from the global headquarters of RW Enterprises, LLC. Going south from Roxie's World, it's the first clear sign that a trip is underway, as the federal city and its monuments fade from view. Coming north, it means, Hooray, we're nearly home! One part of our household's 9/11 narrative that didn't make it into the 2008 post is that, on the weekend after the attacks, the Moms felt moved to get in the car and drive down to see the damaged building. It felt necessary and appropriate to do so. They are hardly fans of the military-industrial complex, though Moose has always admitted that in the aftermath of the attacks she took comfort in the sounds of fighter jets constantly passing over the house. In any case, they needed to see for themselves the appalling gash in the massive building, smell the smoke from the barely extinguished fires. They were hardly alone in that impulse. The highway was packed with vehicles that slowed to a crawl as they approached the Pentagon.

Others have written about experiencing 9/11 at some distance from the attacked places. (See, for example, Historiann's comment on TR's post.) The Pentagon is different from the World Trade Center in being geographically separate from its surroundings and in being not a relatively open center of commerce but a closed space designed to be hard to access and even, in some ways, to see. These are points made in a thoughtful piece by Marc Fisher in WaPo a couple of weeks ago on why and how it is that public memory of the 9/11 attacks focuses almost exclusively on New York, with only nominal attention paid to the Pentagon (or Shanksville, PA, for that matter).

"[T]he story of 9/11 has become overwhelmingly a New York story," Fisher notes. He goes on to explore this imbalance by acknowledging the many factors that have given rise to it, including the scale of the losses at the different locations, the lack of video of the plane hitting the Pentagon, the building's architecture and its physical remoteness from its surroundings, and a military culture that favors secrecy and efficiency over openness and prolonged public debate over how to honor the victims of the attacks. Fisher writes without rancor about the skewing of public memory toward New York, refusing to enter into an unseemly game of comparative suffering, but his point should raise concern for those who are interested in having as full and accurate a record as possible of the attacks and their impacts.

The military may not be comfortable having such a devastating assault on the symbolic and actual center of American power be a part of public memory, but the rest of us should insist upon it. The Moms have lived in the Washington area for a quarter century now. Nothing in all those years compares to those terrible hours of uncertainty when the Pentagon was burning and rumors swirled of bombs on the grounds of the Capitol. If history "requires the assembling and collation of memory," then Washington stories, too, must be brought into the account. The Pentagon was on fire. My friend could see the flames from her office window. Goose went to Taco Bell on her way home from campus late in the afternoon because neither of us had eaten. I stayed in my bathrobe and watched TV for 16 hours. In the family calendar she faithfully maintains for the household, Goose wrote on September 11, 2001, simply: "The saddest day." That weekend, we drove down to Arlington and went slowly by the Pentagon. We rolled down the windows and could smell the smoke. I don't remember what we said or if we said anything at all. That was a sad day, too. 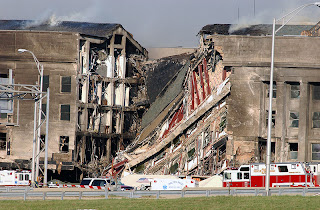