The Day I Became a Dog

With dogs as with people, therefore, one who would enter into significant relationship -- who would, in short, fall in love -- must assume nothing in advance about what the beloved critter will prove to be or do in any given circumstance. Past relationships with similar critters will be of limited value and can in fact be detrimental to forming an understanding of a new dog if one is forever comparing the one to the other. Every sentence that begins, But [our last dog] [loved this] [hated that] [always did this] [never did that] -- , is an insult to the unique and perfect incarnation of doggedness standing before you, ready and eager to love and be loved for and as itself.

Dogs are different from each other. The differences may arise from that vague yet powerful place known as temperament. Some dogs are alpha, others simply are not. Some are willful and aggressive, others are inclined to be docile. Some love water, others fear it when they fear nothing else on earth. Some are territorial and lunge at the UPS guy every day of their lives even if he is the sweetest fellow ever to drive a truck. Others yawn through his incursions with apparent indifference. Some bark lustily and often. Some . . . rarely make a peep. Same breed, different critters. 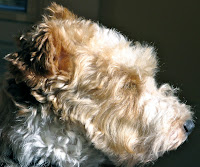 Dogs are different from each other. Some differences arise from experience or environment. (Yes, my clever darlings -- It's a nature/nurture conundrum we are probing here.) A dog raised from birth in a stable, stimulating, critter-affirming home is bound to be different from one who spends the first three years of her life in, say, a Missouri puppy mill, neglected, confined, unsocialized, unloved. That the latter critter could emerge from such deprivation eager to bond with humans and prepared to adapt to a radically different set of circumstances is testament to an admirable resilience. Nonetheless, such a critter will need time to adjust and to figure who and how she will be, now that she has the luxury of being able to make choices in such matters. My yard? you imagine her marveling. What can you possibly mean? Mine? And I should go play in it? What is this thing you call "play?"

All of this hemming and hawing over difference may seem to avoid the question at the top of this post, a question put to us by this blog's dear, though as yet unmet, friend, Tenured Radical, from her lofty new perch over at the Chronicle of Higher Education (which has apparently become a hotbed of lesbian blogging -- Who knew? Yo, Chron, my typist is a raging Sapphist! We await your call!).

Anyhoo, TR has been nagging us quietly persisting with the question of when the new embodied dog of Roxie's World will begin holding forth in this space. It is, as she says, a big question, one that preoccupied the creative team for much of the long, hot, whacky summer of 2011. When the Moms weren't gallivanting from here to there to the other place, Moose spent long hours huddled with Mark Twain, director of the Office of Persona Management for Roxie's World, considering if, when, and how the adorable Ms. Ruby would make her debut as more than just a pretty face around here. Though Moose and Mark often disagree on matters creative and political, they both felt strongly that such a delicate issue had to be handled with the utmost care, especially in light of its potentially blog-transforming significance.

Over drinks at Ishmael's, the seedy yet cozy bar around the corner from the global headquarters of RW Enterprises, LLC, Twain argued forcefully that if Ruby spoke she should not disparage his home state of Missouri, despite her unhappy experiences there, but he thought it would be OK if she cussed. "You know, Moose, this place could use some healthy swearing -- and not just in comments from your pal PhysioProf. There ought to be a room in every house to swear in. It's dangerous to have to repress an emotion like that." Moose was dubious about the swearing, healthy as she finds it to be in her own off-blog communications life. She thought Ruby might offer uplifting advice to people and critters struggling to overcome adversity. "She could become the voice of the glass half full, on account of she got a rough start in life, but she never lost hope and things have turned out pretty well for her." Twain rolled his eyes and ordered bartender Peter Coffin to put a shot of vodka in Moose's next smoothie.

It went on like this for weeks, with Moose and Mark going back and forth and round and round, raising possibilities and shooting them down, until finally one evening, as happy hour was winding down, a scratchy little voice from a pallet beside Moose's seat at the bar said,

I could tell them about the deer.

Moose and Mark looked down at the floor and then at each other in amazement, for Ruby is not in the habit of interrupting their barstool colloquies. "What?" they said, in unison.

I could tell them about the deer.

I could tell them about that night, last week, after the earthquake and the hurricane and the start of school, when the deer was out in the yard, chowing down on the hostas again. I was in the house with you, Tall Lady -- the one Roxie called Moose. The Other Lady -- the one Roxie called Goose -- was out in the yard, frustrated because she couldn't get the deer to leave. You and I saw what was happening and you decided to let me out, thinking I would probably ignore the deer because I'm not much of a hunter but I might manage to startle her anyway and get her to leave the yard. To your surprise, though, in that moment I came into full possession of my mighty terrier heritage. I found my voice, my speed, and my powerful instinct to give chase. I pursued that deer up and down the ridiculously large backyard, barking louder than you had ever heard, determined to make her leave. You and the Other Lady were impressed but worried, concerned that the deer in her panic would attack me. (Such things happen.) She didn't, though. I chased and I chased, and finally, in one delicate movement of her whole body, she leapt the fence and was gone. You and the Other Lady beamed happily at me and gave me a rub behind the ears. "Well, well," you said, "looks like somebody figured out she's a terrier!" I was so excited that I promptly went and took a big poo in a remote corner of the yard, which, you know, I rarely do, preferring to take care of my business on walks around the block.

"That's right, Ruby-doo," Moose said with a doting smile. "That's a wonderful story, and I agree it's one our readers should hear. What would you want them to take away from it?"

How the heck should I know? I did not spend the first three years of my life curled up on the floor of an English prof's study, taking in queer theory and Emily Dickinson by osmosis. Your readers are pretty smart critters. They'll figure out that this is a story about how, six months into my new life with you and the Other Lady, I recognized and acted upon something important about what it means to be a Dog With Humans. You are my people, your yard is my yard. I will love and protect you, as you have loved and cared for me. You will show me a world I never knew existed, a rich, vast, varied world of groomers and grandmothers and pretty boys and feisty girls and beautiful trails and bodies of water that seem to go on forever. In return, I will chase deer from the yard and put my head on the keyboard of your laptop when it's time to stop typing and snuggle. Stuff like that. As I said, though, readers will figure out why the story matters -- You don't have to tell them everything.

Mark Twain looked at Moose and said, "She has a point, you know. Like most stories on Roxie's World, Ruby's charming tale of her encounter with the deer is of the humorous type, and the humorous story may be spun out to great length, and may wander around as much as it pleases, and arrive nowhere in particular."

"Of course," Moose replied. "That's our stock in trade. So Ruby fits right in to our rambling style and our admittedly loose preexisting structure. We don't have to change a thing, and we don't have to explain anything!"

"Good lord, no!" Twain thundered. "Explanations are for comic stories, not humorous ones, and involve such tedious things as exclamation points and parentheses. All of which is very depressing, and makes one want to renounce joking and lead a better life."

"And lord knows there'll be no renouncing of joking around here, eh, Mark? I'll raise my smoothie to that, with an exclamation point!"

Twain raised his whiskey and clinked Moose's glass. They both laughed heartily and with evident relief. From the pallet on the floor, the new dog sighed and laid her head on Moose's foot. My human. My world. My still, small voice.

With thanks to Tenured Radical, for asking the question and helping us to shake off the lethargy of summer. Paws up to you, pal.

(Photo Credits: All photos by Moose. The top one is Roxie at Smith Mountain Lake in October, 2003. The middle one is Ruby on a Sunday morning in March, 2011. The bottom one is Ruby soaking wet from Hurricane Irene on August 27, 2011.)
Posted by Roxie Smith Lindemann at 11:10 AM