Or, Today in Fascinating Coincidences -- Coincidences that, I am sure, are in no way political and certainly not related in any way to persisting gender inequities, which exist, after all, only in the minds of fat, ugly, man-hating feminazis:

WaPo has a story this weekend on efforts to call attention to how few public statues or memorials in our happy little post-feminist country commemorate vagina-equipped persons. According to the story,


Of the 5,193 public outdoor sculptures of individuals in the United States, only 394, or less than 8 percent, are of women, compared with 4,799 of men, according to the Smithsonian American Art Museum’s Art Inventories Catalog, considered the most up-to-date catalogue of such works. And none of the 44 national memorials managed by the National Park Service (such as the Lincoln Memorial) specifically focuses on women and their accomplishments, writes art historian Erika Doss in her book “Memorial Mania.”

EVE (Equal Visibility Everywhere) is a new non-profit group that has been established to call attention to the disparity and its harmful possible consequences. Lynette Long, a psychologist and founder of EVE, tells the Post that the nonverbal message conveyed "by the dominance of male statuary trumps any verbal communication girls receive about being equal to boys. 'Humans tend to trust the nonverbal, and the statues send a very clear nonverbal message. Girls can’t be what they can’t see,' she says." 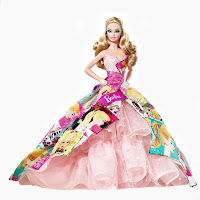 Meantime, over in the business section, the Post reports that sales of Barbie helped Mattel Inc.'s revenue rise by 8 percent during the first quarter, stronger than analysts expected in what is usually a slow quarter for the toy manufacturer after the busy holiday season. Global sales for Barbie were up 14 percent, the first time the Barbie brand has had double-digit sales growth in the first quarter since 1997, according to Reuters.

Which proves once again that girls made of vinyl are ever so much prettier and more appealing than women made of stone. I mean, really, darlings, we can't be cluttering up the nation's hallways and public squares with dour old broads like these, can we? If only those grim-faced gals who spent decades fighting for the right to vote had decked themselves out in some pretty pink ball gowns! 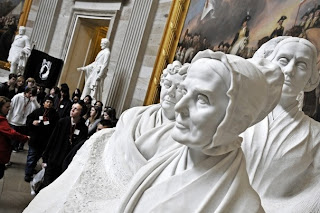 We do hereby call upon the vagina-equipped historians (yes, you, and you, you, too, girlfriend) who read Roxie's World to weigh in on this vital question of public herstory. Should we jump on the bandwagon and demand that statues of long forgotten heroes be dragged out of public spaces in order to create room for women whose accomplishments deserve long overdue recognition? Or should we stay at home, playing quietly with our Barbies -- or, you know, fighting to improve conditions for living women rather than wasting valuable energy worrying about how to honor dead ones? In other words, does it matter that the hordes of young girls traipsing through Washington, DC right now on their springtime trips to the nation's capital will see so few images that resemble them in the hundreds of statues they will wander by in the course of their adventures? Or doesn't it? We have a healthy respect for the politics of visibility, but the truth is this issue isn't one that makes our blood pressure rise, tickled as we are that there's a cute little dog in the FDR Memorial downtown. How about you?

We eagerly await your replies. In the meantime, my typist heads to the stationary bike in the basement to continue the project of re-sculpting her own monumental body. Peace out, darlings, and have a happy weekend.