Carina Chocano, former film critic at the LA Times, shows how it's done in this past Sunday's New York Times magazine in a piece that looks back on the films Pretty Woman and Thelma & Louise.

1. Establish your authority over your subject by bragging about how your undergraduate education in semiotics equipped you with a cultural decoder ring that gave you deep insights into the workings of texts and made you vastly superior to all the rubes around you. Like this:


To immerse yourself in literary theory as an impressionable young person is a little like squinting at a piece of toast until the face of Jesus materializes. It’s a slight perceptual shift (all you have to do is unfocus your eyes) but risky, because there’s no going back to plain toast after Jesus.

Awareness like that can be a terrifying thing, which is why people consistently choose to watch “Jersey Shore.”

2. Pick two texts not quite at random -- though, really, almost any two texts would do, because that's how easy cultural critique is! -- and pit them crudely dramatically against one another in order to prove a highly subjective point about your life gender, power, and culture in a moment of significant transition. Like this:


“Pretty Woman” and “Thelma and Louise” flanked my first postcollege year like a couple of quick-draw gunfighters in a Wild West showdown. They appeared, in 1990 and 1991, respectively, at approximately the moment when second-wave feminism was giving way to the third wave — as Women’s Studies was shifting to Girls’ Studies, as the Riot Grrrl movement was coming into existence, as unapologetic femininity and unchecked rage were linking arms and skipping through the popular culture, snarling at everyone. So when I look back over the long stretch of the intervening decades, I now see those two movies as representing dueling meta-narratives in a postfeminist Mexican standoff. Or maybe as shimmering signposts at a desolate crossroads. Either way, there’s dust, tumbleweeds, Ennio Morricone music in the background and someone lying face down in the dirt.

Quick-draw gunfighters in a Wild West showdown? Yes, kids, that is how culture works! It's one big rock 'em, sock 'em Battle of the Texts! In this corner, we've got the tale of the streetwise sex worker with a heart of gold, and in this corner the hard-driving saga of a couple of gun-toting gal pals taking on the patriarchy one weenie at a time! Which text will win?

3. Declare a winner in the showdown/smackdown by offering up a series of wholly unprovable highly intelligent generalizations about how the films resonated within your head "the culture" of their own moment and well beyond it. Like this:


For the few years after the release of “Thelma and Louise,” the culture seemed unusually and (in hindsight) unbelievably receptive to the plaintive howls of a generation of girls who, as I did, felt exiled from the culture. Within a few more years, though, the whole thing would be supplanted by a far more chipper, more palatable, more profitable version of itself. It’s now nearly impossible to imagine a time, not so long ago, when popular culture was more interested in cool girls than hot girls — or a cultural moment in which girls could become iconic for airing their grievances and not simply their dirty laundry. As it turned out, it was a quick traverse from “revolution grrrl-style now” to “girl power,” as Riot Grrrls gave way to Spice Girls and the dominant pop-culture narrative about femininity went the way of “Sex and the City.” And Carrie Bradshaw (among others) stands pretty clearly as a descendant of Vivian, not of Thelma or Louise.

Ultimately, “Pretty Woman” wasn’t a love story; it was a money story. Its logic depended on a disconnect between character and narrative, between image and meaning, between money and value, and that made it not cluelessly traditional but thoroughly postmodern. Revisiting “Thelma and Louise” recently, I was struck by how dated it seemed, how much a product of its time. And “Pretty Woman,” it turns out, wasn’t a throwback at all. It was the future.

Which of course leaves you vulnerable to snarky replies from crotchety broads who stuck around for the advanced courses in Readin', Writin', and Interpretin' Through a Feminist Lens. You know, like this:

Dear Ms. Chocano: I will see your anecdotal evidence and raise you two. Thelma & Louise "wins" this contest because Goose and I still talk about it, while we haven't thought about Pretty Woman in years. Every time we are on a highway, I will find some excuse to make a T&L reference, as in: "Boy, that lane-encroaching trucker is a douche-bag. Shoot him for me, would you, Louise?" She will agree to do so, and then we will laugh, hysterically. Furthermore, we both teach the film, usually in Lit by Women courses and often in conjunction with classics of feminist protest writing such as Kate Chopin's The Awakening. Far from finding the film dated, we find that its stripped down, allegorical style has given it the staying power of myth. Our students continue to find it compelling, but perhaps that is because they tune in to Tina Fey rather than "Jersey Shore." Or perhaps it's because in our classes we don't urge them to look for the face of Jesus in a piece of toast. We try to explain that culture is dynamic and ideology is clever about reconsolidating its power, but that subversions, critiques, and reimaginings of agency still matter. I mean, sure, culture is a competitive arena, and there is a way in which texts vie with one another for audience and influence, but it seems silly to declare that one film's fantasy has triumphed over another when there is plenty of evidence that Thelma & Louise are still very much alive. At least, you know, in our car. 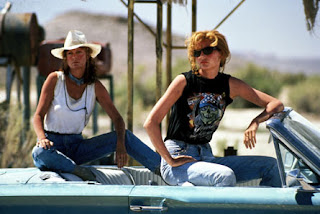 Posted by Roxie Smith Lindemann at 11:49 AM