The Challenge:  Take a picture of an overly familiar place, a place much visited, widely documented, and famous in literary history for its powers to inspire.  Find an angle or perspective that will not only avoid visual cliches but will make that overly familiar place seem unfamiliar, even to an audience of smarty-pants readers who think The Norton Anthology of English Literature is handier than a highway atlas for finding one's way around the back roads of the Welsh-English border region.  Oh, and snap that photo quickly, on account of your merry band of literary travelers has to find its way back to Cardiff to surrender a rental car and catch a train so that the good people of Wales will be safe from the threat of at least one car full of drivers careening around the countryside with someone constantly screaming, "Keep to the left!  Remember, keep to the left, ridiculous as that may seem!"

The Contestants:  Geoffrey, armed with his cute little Panasonic Lumix, and Moose, running around like the Annie Leibovitz wannabe she has always been with her Canon G9.

The Judge:  The official ex-yearbook editor of Roxie's World, Moose, who promises to be 100% objective, because, like, she's totes committed to Fairness and Truth.

Wevs, kids, here's the kind of shot that'll get you voted off this show in the first round, pretty as it is: 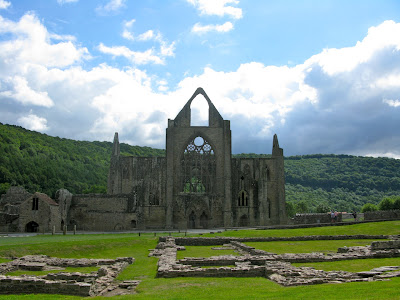 Are you still awake?  Yeah, me neither.  Standard, boring tourist snap that by some miracle doesn't have two or three grouchy Germans looking for the loo strolling across the bottom of the frame.  (It's down to the left, by the way -- the loo.)  Nice, but totally insufficient for our purposes.  Next! 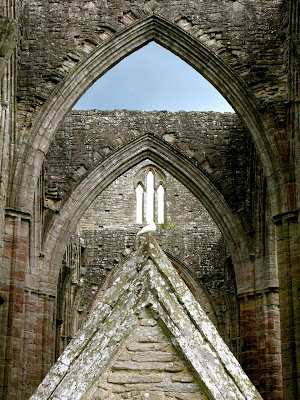 Regular readers will note in this photograph the Moosian fondness for frames and for zooming in on relatively small parts of a large building or landscape as a way of capturing -- or avoiding? -- the whole.  Yep, photography for Moose is often a matter of failed synecdoches.  Oh, and if she were a better technician, you'd be able to see that there is a little white dove perched on the apex of that roof in the bottom third of the frame.  For all the photographer's limitations of skill and vision, we kinda like this shot for the repeated patterns of threes, the attention to texture, and that nice triangle of sky at the top.  In directing the viewer's attention to a particular spot, the image asks us to pause and look carefully at something we otherwise might not see. 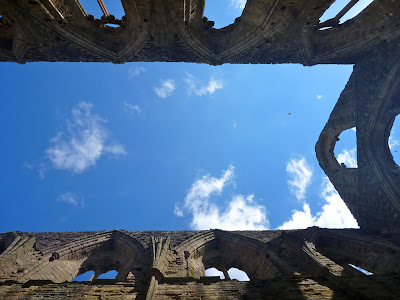 Geoffrey takes a totally different strategy on this assignment, bravely seeking to capture both the epic scale of the 13th-century building and the drama of what time has taken away from this awe-inspiring space -- i.e., its roof.  Standing in the middle of what was once the edifice's great church, he looks up and captures three walls open to and reaching toward heaven, a heaven that in that particular moment looked especially appealing, with its puffy clouds and big patches of bright blue sky.  (Moments later the sky was dark, and the abbey became a different place altogether.)  Geoffrey's image is beautifully composed but also wonderfully disorienting.  It conveys immensity and loss, ambition and elegy.  The beautiful emptiness at the center of the frame perhaps recalls the secular consolations Wordsworth found in the area around the abbey, where he found "tranquil restoration" in nature.

So, who wins the Tintern Abbey coffee mug that Goose did not purchase yesterday in the gift shop?  We are giving Geoffrey the edge -- but we'll let our devoted readers weigh in before we make the final decision.  Have at it, gentle judges.  The moms and Geoffrey are in London now and off to catch a museum or three.  Hope you all are doing well and enjoying the dog days of August in your neck of the woods.  Peace out!
Posted by Roxie Smith Lindemann at 7:01 AM