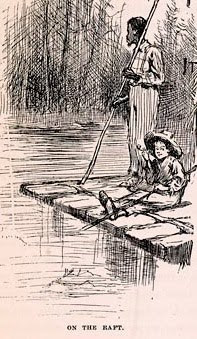 (Image Credit:  Mark Twain, The Adventures of Huckleberry Finn [1885], via)

The fantasy of escape from civilization is so deeply rooted in American culture that we might as well say it springs from the nation's soul.  It's a fantasy that appeals to our sense of ourselves as individuals and free agents, sturdy beings unencumbered by history, family, or society.  It's a total crock, of course, but it's a crock that has resulted in some truly fine writing and storytelling -- everything from, you know, this to, say, this.

Anyhoo, the fantasy of escape from civilization is also often a dream of escape from technology, from whatever machines are perceived to be mucking up the paradisal gardens of our collective imaginations at any given moment.  Lately, it would appear, the machine we long to escape is the one you are holding in your hands or lap as you read these words.  Have you noticed?  Suddenly everyone is running away from their computers, declaring themselves unplugged, subjecting themselves to heroic experiments in disconnection.

To us, though, the most fascinating account of these forays off the grid is the one prominently featured in Monday's Times -- the story of five neuroscientists interested in the effects of using digital devices on the brain spending a week together in a remote part of southern Utah away from computers and other communications tools.  They literally went "back to the raft," using themselves as guinea pigs to test whether the effects (on thinking and behavior) of our reliance on such devices might be reversed by a "retreat into nature," as Matt Richtel puts it in his story. 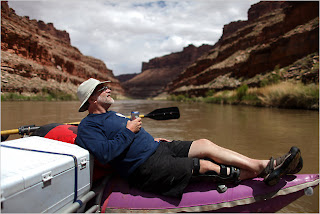 (Photo Credit:  Chang W. Lee, New York Times.  Art Kramer, of the University of Illinois, studies the neurological benefits of exercise.)
Not surprisingly, if you put five really smart guys with overlapping interests but different types of expertise out in the middle of nowhere for a few days, the dudes relax, chug a few brewskies, and shoot the $hit -- though in this case the $hit is like, you know, pretty high falutin'.  Instead of making fart jokes around the campfire, they're speculating about what happens to the brain when humans multitask and what are the best imaging techniques for capturing "the effects of digital overload on the brain."  They are also doing things like forgetting to put on their watches and not reading the research papers they had packed along on the trip.
Further study will have to be done, of course, but it would appear that the guys were on VACATION!  Go read the story, which is really pretty cool for the way it shows the scientists sharing ideas and using their own brief experience in nature to test and in some cases modify their previously held assumptions.
Here's the thing, kids:  Roxie's World is by no means opposed to getting away from it all.  We are totally down with the salubrious effects of close encounters with nature and the importance of making space in one's life for quiet and reflection.  The moms like nothing better than a good long walk, which is why they made such excellent dog people during my embodied years, and Moose has practiced a variety of meditative disciplines, including yoga, t'ai chi, and long-distance running, over the course of her adult life. (For new readers, here's a post that offers a kind of statement of faith from Moose on the value of walking away, temporarily, from one's ordinary life and world.)

During their recent trip to England and Wales, both moms disconnected to some degree:  Both put "out of office" messages on their e-mail, and both spent a lot less time hunched over their computers doing the kinds of things they typically do online.  Moose stayed off Twitter for two whole weeks and discovered she didn't miss it at all.  She kinda kept up with her blog-reading, but didn't post comments on any blogs but this one.  Posting here was light and trip-related, as you know.  She checked Facebook regularly, mostly to post travel photos and stay in touch with folks at home.  She took her iPhone with her, thinking she would use it as a back-up camera, and never took it out of her pack.  Goose's pack was so loaded down with Mac gadgets that Moose referred to her bag as the Apple store, but she made good yet limited use of both laptop and the new iPad.  Moose also did a test-read on the iPad during the trip home and is pleased to report that Charlotte Brontë's Villette mitigates ever so slightly the discomfort of international flight for people who insist on traveling without detaching their legs.

We digress.  What's fascinating in this rash of vacation/exile from technology stories is the persistence of the fantasy that one can and should endeavor to separate oneself from technologies that are perceived as threats to the self.  Our reliance on these tools, according to this logic, weakens our reliance on ourselves.  It is at best a distraction, at worst a dependence, which is why, over and over again, these stories are framed as addiction narratives. "I've tried various strategies to limit my time online," James Sturm laments in his first post about his decision to go without the Internet altogether. "But nothing has worked for long. More and more hours of my life evaporate in front of YouTube. Supposedly addiction isn't a moral failing, but it feels as if it is."  Hi, I'm James, and I'm an Interwebz addict.

Henry David Thoreau is here for you, James -- and for you, Katrina, and all you other techno-junkies trying to come to grips with your pathetic desire to remain a functioning member of the wired world.  Thoreau groused all the way back in 1854 that, "Our inventions are wont to be pretty toys, which distract our attention from serious things.  They are but improved means to an unimproved end . . . .  We are in great haste to construct a magnetic telegraph from Maine to Texas; but Maine and Texas, it may be, have nothing important to communicate." Oh, Henry, if only there'd been Twitters on the outskirts of Concord, MA back in your day. We'd love to hear you rip into that!


Our point is not to dismiss the substance of some of the claims being made about human-computer interaction these days. There is little doubt that massive amounts of time get wasted in a range of more or less trivial pursuits online and that our techno-toys often serve to distract us from the quiet desperation of lives that feel meaningless or beyond our control. (Oil spill got you down? Click here and get a new cow for your fake farm! Don't worry! Be happy!) We are also eager to see what further neurological research will reveal about whether heavy usage of communications devices is actually rewiring our brains and, if it is, whether that rewiring is clearly detrimental to the brain's functioning or simply benign.

Rather, our point is that this kind of ambivalence toward technology has a long, thick history in the United States.  Americans have been frantically searching for spaces in the world and in themselves supposedly untouched by the techno-industrial machineries of modern life for hundreds of years. That yearning is steeped in privileges of race, class, sex, and technological access. (We give Sturm credit for at least acknowledging the irony of documenting his experiment in living offline in an online publication.) You are not a gadget is the title and the central claim of Jaron Lanier's important yet finally romantic manifesto about the threats to "individual intelligence" posed by the "pack mentality" supposedly encouraged by Web 2.0 designs. We have never been human, Moose has always wanted to reply to that claim, channeling the philosophical core of Donna Haraway's argument in When Species Meet. (Romantic or not, Lanier's book is on the syllabus for the blogging course Moose will start teaching in a couple of weeks. She looks forward to grappling with it in a class of digital natives.)


We have never been human -- In other words:  We have always been gadgets, more or less.  Unplug, darlings. Tell your inbox to go f*ck itself. Take a walk or a hike. Get down on your knees and swear with dog as your witness you'll never play Farmville again. Knock yourselves out, but don't for one second imagine that in doing so you separate yourself from techno-culture. We dream of a world above, beyond, or outside this sad, sullied place, but where is it, my pretties? Have you seen it? Come back to the raft -- but rest assured that GPS will guide you home. You may not be human, but you still have to figure out how to survive in this world. You'll be better prepared for that task if you cut the crap and acknowledge that the problem, whatever it is, is not in our gadgets but in ourselves. Mark Twain understood that. Do you? Oh, how I hope you do. Peace out.
Posted by Roxie Smith Lindemann at 8:05 AM