(Not) So Far Away

Or, Just Another Wednesday Night with James and Carole -- and Nancy and Hillary 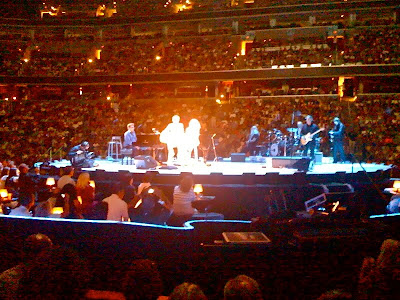 Oh, we could pretend that strange silhouette effect was exactly what Moose was going for when she snapped the above photo of James Taylor and Carole King on stage at the Verizon Center the other night. We could wax all poetic and philosophical about how the whiteness at the center of the frame underscores the powerful sense of identification the aging hippie audience clearly felt with the aging hippie yet still going strong singer-songwriters who cruised impressively through a two-and-a-half hour show. We project ourselves into that space, just as, over the course of decades, we have projected ourselves into spare and simple lyrics that seemed to be telling the stories of our lives.

Close your eyes and think of me
And soon I will be there
To brighten up even your darkest night . . . .

Can I believe the magic of your sighs
Will you still love me tomorrow . . . .

That's all true, more or less, but the truth about the photo is that it was the least crappy shot Moose was able to get on her (flashless, zoomless) iPhone non-4G. At least you can see what awesome seats she and Goose somehow managed to snag at the last minute. They were in the fourth row, directly opposite Hillary Clinton and Nancy Pelosi, who seem to be dating and ruling the world. Pelosi's smiling face was shown on the Jumbotron during the encore, but Hill had already left the building, no doubt to go back to spanking generals in the Sit Room. (Well, somebody should be spanking them, don't you think?)

Anyway, the show was great. Catch it if you can, sometime between now and its conclusion in Anaheim on July 20. (Ooh, Tanglewood on the 4th of July! Wouldn't that be nice? "I Feel the Earth Move," under the stars! with Roman candles!) The music has held up remarkably well, and so have Taylor and King, who manage to make an arena show feel as intimate as an impromptu singalong in somebody's living room. The intimacy is created in part by Taylor and King's obvious warmth and ease with one another, but it's enhanced by a round stage that slowly revolves to bring the performers closer to more members of the audience and by the old photos of both singers that are flashed on screens above the stage throughout the show. Cheesy? Perhaps. Guaranteed to crank up the waterworks in the overwhelmingly white, female, middle-aged audience? D'oh!

Well, so what? King is 68 and seems to be having the time of her life, boogieing around the stage on stiletto heels and braving the high notes, despite a bit of weakness in her upper range. Taylor is 62 and is genial, serene, as honey-voiced as ever. The show may traffic in nostalgia, but the bittersweet poetry of their lyrics reminds us over and over again that the good old days were full of pain, loss, and struggle. Moose was 12 years old when Tapestry came out in 1971, yet she totally resonated to the sense of romantic exhaustion animating "It's Too Late": "Something inside has died/And I can't hide and I just can't fake it." Who knows what youthful hurt felt expressed for her in those lines? Nearly 40 years later, the resonances are all different and the wisdom feels more hard-won. Because it hurts like hell when you wake up every morning and realize you truly won't get to see someone you always thought you'd see again. And yet, it also matters that 40 years later you know the answer to the all-important question, Ain't it good to know that you've got a friend? Oh, yes, it is, my darlings, oh, yes, it is. Call out my name, and I'll be there, wherever there may be. Cross my heart.

Now, go read this nice profile Anthony DeCurtis did on Taylor and King in the Times a few weeks back. Then close the door, get out your hankie, and click on this vid of a lovely 1971 performance of "You've Got a Friend." JT does the vocal, Carole is on piano, and Leland Sklar, who, along with his amazing beard, is part of the band currently touring with Taylor and King, is on bass. Peace out, aging children, and happy Friday.