The Deer Who Came for Brunch

. . . and helped herself to a prodigious amount of hosta salad before Moose noticed she was out there and ran out into the yard in her nightgown shrieking, "Go away! Get out of my hosta!": 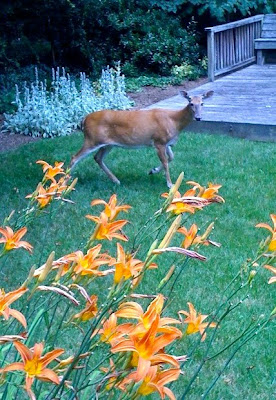 The deer was unperturbed by Moose's histrionics and went out to a remote, shady part of the yard for a postprandial nap, rousing herself only when Moose came back out to capture the moment on her iPhone.

Interestingly, as that last paragraph was being typed, Moose looked out and saw that the pretty yet unwelcome guest had returned for another go at the all-you-can-eat hosta bar. She has now officially become that crazy neighbor who shakes her fist and yells in order to protect the sanctity of her home. I will let you know if copies of American Rifleman start showing up on the doorstep.

Note to the Moms: You know, it's really OK with me if you start looking around for a new dog. Srsly, guys, it's been almost six months since I kicked the bucket. I'm doing fine up here in what we might for lack of a better word call heaven, but it's clear that things have gone straight to hell security-wise out in my ridiculously large backyard. Do it for the hostas and, you know, for what's left of your dignity. Just sayin'.

The moms have been inordinately preoccupied recently with matters domestic. In the last few weeks, they have been dealing with, let's see, well . . .
Wow. That's a long list!

Note to Dr. Crazy, who just bought her first house: I swear to dog, home ownership usually isn't this much of a pain in the a$$ or a drain on the wallet. Do not read this post and get scared. The moral of this tale of temporary woe is that everything can be fixed. It's just a matter of knowing who to call. As time goes on you, too, will develop a long list of reliable guys and gals to call in the event of emergencies or problems beyond your range of expertise. As for the money, well, some things (e.g., the ice dams) are covered by insurance, and some you just have to close your eyes and say, "I will get it all back at tax time, I will get it all back at tax time." Your home is an investment. Keep it in good shape in order to protect or enhance its value. Take it from a couple of fiscally conservative old broads who screwed up the nerve to cash out a decade's worth of equity and re-build the whole damn joint back in '03. You'll be glad you did.

While we are on the subject of housekeeping, Moose has racked up a long list of open tabs in her browser. We'll pass them along to you for your summer weekend reading pleasure:
That's it, kids. A happy Friday to you and yours. Here's hoping the deer and the antelope are staying on the right side of your high fences.
Posted by Roxie Smith Lindemann at 3:19 PM