News, of the Hot, Homolicious Variety

The mercury is pushing into triple-digit territory here in Roxie's World, kids. It's so hot my typist says she can't think straight, so I told her to try thinking gay. Here's what she came up with. 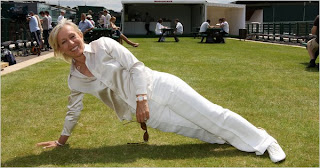 The 9-time Wimbledon singles champ is also recovering from breast cancer and a nasty lawsuit filed by an unhappy ex, Toni Layton, so we're all pleased as punch to see her looking good and still planning to climb Mount Kilimanjaro in December. Still, Moose thought Martina's side plank pose was a little show-offy, but that could be because so far she can only manage a tentative downward-facing dog on her achy, inflexible left wrist. We are encouraging her to be inspired by Martina's gritty comeback, because bitterness, as you know, is not becoming. Fine, she said. Find me a mountain to climb. Your suggestions, as always, are welcome.

2. Splendor in the Post: WaPo continues to promote same-sex marriage as the greatest thing to hit the nation's capital since air-conditioning and Ben's Chili Bowl. Here's a photo from today's featured wedding in "On Love": 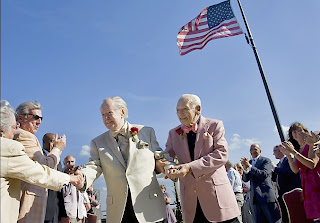 The two happy gents are 88-year-old Henry Schalizki, left, and 89-year-old Bob Davis, right, who first met in 1942 in Rhode Island and legally wed June 20, 2010 on the balcony of the presidential suite at the J.W. Marriott in Washington. They have been fixtures on the Washington theater scene for decades, but Schalizki only officially outed them in 2008, when, in accepting a Helen Hayes Governor's Award for their support of local theater companies, he remarked, while gazing at his partner, "I have been greatly loved, and I've loved greatly in return." Davis was upset with the disclosure at first, but he also got miffed at Schalizki recently for wearing white socks to a formal dinner party. When Schalizki claimed that Van Johnson wore red socks, Davis tells the Post that he retorted, "Well, you're no Van Johnson."

See, kids? True love means you fight about socks because you've figured out it's pointless to fight about other stuff. And, if you're lucky, it means there will always be someone around to tell you who you are and who you ain't. Go read the story, and props to the Post for the prominent play it is giving to same-sex couples legally tying the knot in DC. As we noted in a post earlier this month, such stories are a powerful means of altering the ways in which the public sees the institution of marriage, and that is to be applauded, regardless of where one stands on the queer politics of marriage.

3. Marriage in the Court: Queer legal-eagle Nan Hunter does a careful parsing of the closing arguments in Perry v. Schwarzennegger, the federal lawsuit filed against California's Prop 8, which made same-sex marriage illegal in the state. She feels confident that Judge Vaughn R. Walker is going to find for the plaintiffs, so her analysis focuses on trying to suss out what the basis for his reasoning is likely to be. It's a fun game of legal mind-reading, especially for those of you who get all hot and bothered over the difference between strict scrutiny and rational basis standards of review. And, really, who doesn't?

4. QTU in London: Follow along as an intrepid group of Queer the Turtle University students spends three weeks in merry old England on the first Study Abroad course offered through the happy little program in LGBT Studies that Moose directs. The course, "Queer London," is being taught by one of the loyalest of our loyal readers. Here's a paragraph from the course description:

London, among the world’s most vibrant queer metropolises, will be the destination for this study of LGBT history, literature, and culture. We will be participating in both the London Pride Festival and the London Literature Festival. We will read and discuss selections from historical and literary works to coincide with our class events. We will also meet with local scholars, gallery directors, writers, and queer community organizers/activists to understand more fully the state of queer culture in contemporary London. In the evenings, we will attend theatrical, musical, and literary events.

Gosh, kids, did you get to take courses like this when you were in school? Yeah, we didn't think so. The fabulous class blog, written mostly by the students, is here. Follow the Turtles as they go from museums to galleries to poetry slams to lunches with eminent queer scholars! It'll make you feel young and wild and adventurous again, or, you know, as old as the stolen marbles in the British Museum. Alas. 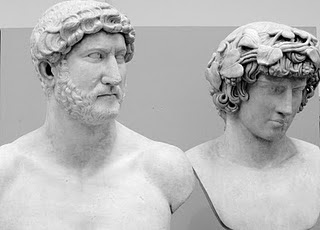 Take care, my overheated darlings. Here's hoping your World Cup runneth over with some cool and tasty beverage and that all your good news has a touch of the homolicious about it. Peace out.
Posted by Roxie Smith Lindemann at 6:03 PM