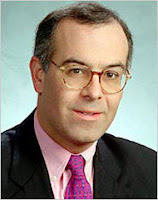 Everybody on the Interwebs is trying to figure out what the heck David Brooks was talking about yesterday in a column he wrote defending study of the humanities during a period of shrinking labor markets. Now, of course, the official position of Roxie's World is that all dog's children ought to be English or history majors in order to assure a steady supply of scintillating cocktail party conversation in the next generation. We are, in other words, on board with the gist of his argument, which is that humanities disciplines teach skills in critical thinking and creativity that don't get taught elsewhere and shed light on aspects of human behavior that no scientific or technocratic account can adequately explain.

So far, so bueno. Halfway through the column, however, Brooks introduces readers to one of the weirdest analogies ever produced in the history of thinking -- which is funny, because one of the benefits Brooks claims for the humanities is that it will give students "a wealth of analogies." That's true, David, and if you stick around for the advanced course you will learn to distinguish a good analogy from one that will make your readers scratch their heads in befuddlement or wet their pants laughing at the ridiculous image you have conjured up for them.

Which brings me, of course, to The Big Shaggy. Yep, that is the big takeaway from Brooks' column, the cherry on top of the sundae he concocts in defense of the humanities -- Or, no, the final sandbag he throws onto the levee he builds to resist the tide of those who would insist that the humanities are a luxury we can't afford in hard times. (He uses the levee analogy early in the column, which we think has unfortunate Katrina-esque resonances, but we will overlook those in the interests of time and comic efficiency.)

"The Big Shaggy" is Brooks' way of describing what others have called the unconscious, the spaces "deep down" in people from whence arise "passions and drives," "yearnings and fears" that are largely irrational. The Big Shaggy is "an inner beast," a raw force that in its destructive aspects leads, according to Brooks, to such problematic behaviors as a fine Christian governor skipping off to Argentina to, um, shag his Argentinian mistress or people being mean to each other when they disagree politically rather than sitting around a table on The Newshour politely putting one another to sleep. In its constructive aspects, the Big Shaggy makes people really good athletes and artists -- but not bloggers or journalists, because, according to Brooks, their "fast, effortless prose . . . lacks the heft to get you deep below."

Fast? Effortless? Ha! My typist says that kind of slackitude might get you published in The New York Freakin' Times, but it sure won't pass muster at America's favorite dead dog blog! Who you callin' shallow, Brooksie? Huh?

In any case: Again, we take Brooks' point and generally agree with it. Indeed, we think his argument offers support for the kind of work that has transformed the humanities in the past couple of decades by critically examining the deep social and psychic forces that prop up a narrowly constructed notion of the normal by demonizing the shaggy beasts of desires and identities that don't fit the grid. Brooks likely didn't intend to ally himself with proponents of queer theory and critical race studies, but his logic is not dissimilar from those who have seen the queer as a negative, non-innocent force resistant to order and rationality. David Brooks, meet Lee Edelman!

We kid, kind of, but even as we wrap up the black turtleneck and sleek new specs that we will be sending Mr. Brooks as a way of welcoming him to the Cool Club, we can't resist joining in the broad-based Interweb effort to figure out who or what the Big Shaggy actually is. Chewbacca? Maybe. The Abominable Snowman? Possibly. The Heavy Bear imagined in a lovely poem by Delmore Schwartz? Pretty likely.

But in this here corner of the neither quickly nor effortlessly written blogosphere, there is one and only one candidate for the Big Shaggy, and I think you all know who it is: 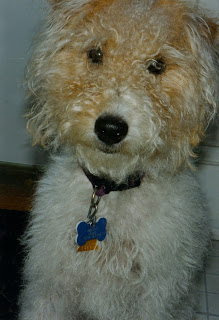 The moral of this story? Analogies can make or break a piece of writing. Handle with care or unintentional guffawing may result.
Posted by Roxie Smith Lindemann at 12:19 PM