A journey of a thousand miles begins with a single step. -- Lao-tzu 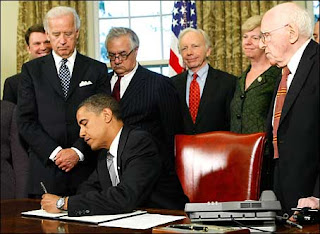 Two quick things we can honestly say we liked about the president's signing ceremony today for the memorandum that will temporarily extend some federal benefits to same-sex domestic partners of Foreign Service and executive branch employees:

1. In his remarks, the president referred repeatedly to the fact that this step, made under significant pressure from supporters of LGBT equality who have been disappointed by his administration's actions on their issues to date, is only a first step and that there is much more that remains to be done, including passing the Domestic Partners Benefits and Obligations Act, which would extend benefits to all federal employees, and repealing the Defense of Marriage Act, which he described as discriminatory (but which his Department of Justice defended in court last week). We appreciated seeing an American president in the Oval Office identifying by name specific LGBT-affirming legislative actions he would support and pledging "to work tirelessly on behalf of these issues in the months and years to come." No, he didn't announce a Road to Damascus conversion on the issue of marriage equality, but he took an important substantive step forward and he did it in the symbolically resonant space of the Oval Office.

2. We were also pleased and moved to see veteran LGBT activist Dr. Frank Kameny standing to the president's left during the signing ceremony. At its conclusion, the president turned and presented the pen with which he had signed the memorandum to the 84-year-old co-founder of the Mattachine Society of Washington, DC, who has been working since the 1960s to end discrimination against LGBT employees in the federal work force. Having Kameny present for this moment was a nice touch. It sends a signal to LGBT politicos who had started to doubt the president's commitment that someone in the White House understands the history and the stakes of LGBT demands for justice. It's a gesture that may buy the administration a little more time to figure out how to move forward. (For more on the life and legacy of Frank Kameny, please visit the wonderful Rainbow History Project of Washington.)

Tick-tock, Mr. President. Justice delayed is justice denied, but we will give you a qualified PAWS UP for taking a step -- and publicly acknowledging how far we have yet to go.

Watch the vid of the signing ceremony. It's short, and it is a kick to see Dr. Kameny enthusiastically receive the pen from the president at the end.

Pam's House Blend has a transcript of the president's remarks here. Text of the memorandum is here.

AM Update: Reactions roll in to the president's move yesterday. Wa Po has a couple of glass half full pieces, one that focuses on responses from federal workers who will be affected by the expansion of benefits and one that focuses on the backstory of LGBT advocates working with the administration from the time of the transition to plant the seeds for pro-gay policy moves. There is also a less happy-happy piece about the president's reluctance to "wade into" gay issues, as if they were some kind of toxic bog of ickiness bound to sully Obama's pretty ankles. NYT is glass half empty, with a piece focused on how disappointed many advocates are with a gesture that seems tokenistic and half-hearted. Meanwhile, over at Americablog, John Aravosis burns with a white-hot rage -- toward Barney Frank, toward HRC president Joe Solmonese, and toward all those bums in the Obama admin who suckered him and many others in the LGBT community into believing they were a part of the whole hopey-changey plan. (That last link gives you reactions from most of the major LGBT advocacy orgs, btw.)

Roxie's World went pretty easy on you last night, Mr. President. It's clear you have a lot of work to do with an important constituency that feels wounded and betrayed by your young administration's (in)actions so far. It's time to throw caution to the wind, sir, and realize that a fighter for justice is going to have to wade into the muck of injustice and get his ankles -- and even his hands -- dirty in order to get the job done.
Posted by Roxie Smith Lindemann at 9:03 PM