1. Roxie, how's the dying going? Weren't you supposed to be dead by now?

Indeed, I was, thanks for asking, but I hope loyal readers won't be disappointed to learn that I am way behind schedule on the whole dying thing. Perhaps I have picked up my typist's habit of procrastination, or perhaps my primary vet, Dr. Kevorkavet as she is known in our house, was off in her prediction (dramatically announced here) that I would expire in two weeks without treatment. The sand has run through the hourglass she set up for me two weeks ago this very day, but I live and breathe, beloveds, and don't have any sense that the curtain has risen on my play's last scene, so put your hankies away until further notice.

I am still on what we are calling hospice care but doing well under the tender supervision of an expanding platoon of nurses. I've been off all medications for more than two weeks. My back legs aren't working, but I am not in pain, so Moose has decided I never was in pain and that the problem with my mobility in the past couple of years was probably due not to arthritis but to a neurological condition that causes weakness but not pain. (We'd have to do a bunch of tests to confirm that diagnosis, but, frankly, at this point, we have more faith in our guts and good sense than we do in doctors, so we are opting not to do that.) I continue to eat, drink, and poop normally, and my coat is so soft that Moose buries her nose in it at least once a day. I use my front paws to scoot around the house a little and can still take a few steps out in the yard. I remain alert and content. At least once a day, I cover Goose's face with kisses just to let her know who is boss.

2. If a tree falls on the White House lawn and nobody hears it, is it still George Bush's fault? (Apocalyptically bad weather in the DC-area again today, kids -- It has to be somebody's fault.)

Absolutely. I think this AP video proves that beyond the shadow of a doubt:

3. Will the terrorists win if American cartoonists depict Dick Cheney as a leather queen doing a really kinky dom scene?

Oh, hell, no. Cheney sent our kids to Iraq to make the world safe for just this kind of stuff: 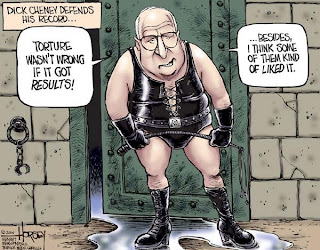 4. If Obama is a "fierce advocate" for LGBT equality, what would an un-fierce advocate be doing on DADT, DOMA, ENDA, and other issues?

Excellent question -- Let's hand that one off to Butch PhD, since she came up with it on last night's show:

5. It's summer. Soon it will be too hot to go outside. I can't afford a vacation and, really, if I write all summer long I run the risk of finishing that dissertation and having to go out on the job market in a year when there will in all likelihood be no jobs whatsoever. What should I watch on TV?

Easy: Get Showtime for the summer and watch Weeds (season 5) and the brand new Edie Falco vehicle, Nurse Jackie. Granted, that is only an hour of viewing pleasure every week, but, hey, you can watch each episode two or three times and tell yourself you are looking for clever pop cult references to sprinkle into the diss that you aren't finishing! We continue to worry about the dark turn Weeds has taken, but it pairs brilliantly with Nurse Jackie, where Falco's Eliot-quoting, oxy-snorting, nun-educated tough girl is riveting. The show is smart and stylish, and the supporting cast (which includes Anna Deveare Smith!) is strong. We have a hunch Nurse Jackie is going to make us long for a check-up. (Watch the first episode of Nurse Jackie here. See Mary McNamara's review of both shows here.)

What else have you got cookin' this summer, kids? Let us know. If my death is on hold, I better get back to living at full throttle, and that means making sure my legions of loyal fans are well and happy and pleasantly distracted from the seriousness of everything. Don't be strangers, darlings. Give your old pal Roxie a click sometime. You won't regret it. Peace out.
Posted by Roxie Smith Lindemann at 8:20 PM