Secretary of State Hillary Clinton had surgery today to repair a broken elbow after she fell Wednesday in a parking garage at the State Department on her way to a meeting at the White House. The surgery, we are pleased to report, because we care deeply about the SOS and all of her body parts, was a success.

Which means we are now free to ask,

If you are comedian Craig Ferguson, who had this to say in response to news of Clinton's injury:

Not such a great day for Hillary Clinton. She fell down, broke her elbow . . . . You know, Fox News is going to be all over this story. This proves the Democrats are weak. Reagan fell over 10 times, didn't even break his hair.

Now the official report said that Hillary fell while she was walking to her car in the parking lot of the State Department. But Hillary likes to exaggerate, so she's telling everybody it was sniper fire.

The Secret Service performed beautifully but they had to use the Jaws of Life to cut Hillary out of her pantsuit.

If you are comedian Jimmy Kimmel, who offered this doodalicious little quip:

Our secretary of state, Hillary Clinton, is in a cast. She fell and fractured her elbow. Fortunately, her scowl broke the fall, so she is okay.

If you are Dave Letterman, who said this, perhaps hoping not to infuriate the only two women left in the country who aren't outraged at his tasteless jokes about Sarah Palin and her daughter:

When he heard [Clinton] broke her elbow, Rush Limbaugh sent over some painkillers. So she's going to be fine.

If you are Melissa McEwan, goddess of Shakesville and most righteously hilarious feminazi on the face of dog's earth (except for my typist), who had this to say on the subject of Hillary Clinton's broken elbow:

The fall is just a cover story. It's really a repetitive strain injury sustained from four decades of nudging dudez in the ribs to get shit done or get the hell out of her way. Feminist elbow.

Now that is funny, Liss. Thanks for showin' 'em how it's done. You get a PAWS UP from the funny girls of Roxie's World, and the SOS gets two Vicodins and this inspirational poster for Edie Falco's delicious new show about another woman with her own wicked case of feminist elbow. Get well soon, Hill. The world needs you, and we love you. 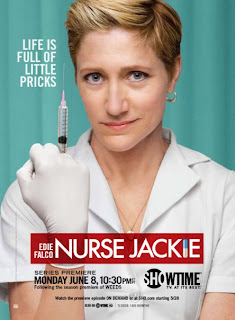