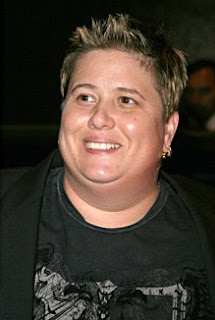 Chastity Bono, child of Cher and the late Sonny Bono, announced yesterday that s/he is transitioning from female to male. Bono, 40, came out as a lesbian (to family in 1987 and publicly in 1995) and has been a high-profile advocate for LGBT equality for nearly 15 years. He has published two books, Family Outing: A Guide to the Coming-Out Process for Gays, Lesbians, and Their Families and The End of Innocence: A Memoir, been a spokesperson for HRC, and served as Entertainment Media Director for the Gay and Lesbian Alliance Against Defamation.

According to a report in yesterday's New York Daily News, Bono began transitioning shortly after his fortieth birthday in March and now goes by the name Chaz. His publicist Howard Bragman was admirably low-key in announcing the news:

"Chaz, after many years of consideration, has made the courageous decision to honor his true identity," Bragman said.

"He is proud of his decision and grateful for the support and respect that has already been shown by loved ones.

"It is Chaz's hope that his choice to transition will open the hearts and minds of the public regarding this issue, just as his coming out did nearly 20 years ago."

You know, there are way easier jobs for the children of former pop cult icons than prying open the dead-bolted hearts and minds of "the public." Oh, sure, "the public" might occasionally do something as sensible and noble as voting for a smooth-talking young black guy over a scary-talking old white guy, but "the public" still includes just enough gun-toting wack jobs (e.g., him and him) that a celebrity kid could be forgiven for deciding to keep quiet about his or her gender identity. It's my life, Chaz might easily have thought, my body, my complex web of intimate feelings, choices, and relationships. The public doesn't need to know and has no right to weigh in on who I am and how I live. Screw the public. Let somebody else be the poster kid, the whipping boy for gender transitivity.

Now, of course, "the public" also has a way of not letting celebrity kids keep their stuff private, so perhaps Chaz Bono was largely motivated by a desire to get out ahead on a story that was bound to come out sooner or later, one way or the other. If that is the case, you can hardly blame him. To step up before the physical effects of transition have become apparent and say, "This is who I am, this is what I am doing. My family is on board, and I am inviting you to get on board," frames the narrative in terms designed to assure his dignity and elicit the audience's sympathy. The statement, laconic as it is, also offers a preview of coming attractions. Reading it, you can already see Chaz and Cher off on the Happy Trans Family Tour of 2009, curled up on Oprah's couch, getting real with Dr. Phil, yukking it up with Ellen. "My child is my child," you can hear Cher saying, her hands wrapped lovingly around his as the camera zooms in. "Was I surprised? Yes. Do I mourn the loss of a daughter? In a sense, yes, but at the same time I welcome, support, and honor my son. A parent knows what a child needs, and this is what my child needs. I am with him, absolutely and unconditionally."

Cher will say those words, or something very close to them, and somewhere out in TV land, a trans kid will hear them and know that telling the truth doesn't necessarily mean losing the ones you love and need the most. Or a mother will hear them and say to herself, "I can do that, dammit. If Cher can do it, I can do it. I can tell the truth, for my kid's sake." And she will. And the sweet old world will go on spinning on its axis.

PAWS UP to Chaz Bono, for telling the truth and for believing that the public can handle hearing it. Dogspeed on your journey, Chaz. Know that the whole pack here in Roxie's World is running with you -- proudly, lovingly. We got you, babe. We got you.
Posted by Roxie Smith Lindemann at 11:01 AM