Check it out, kids. America's favorite dog blog devoted to politics, pop culture, and basketball is suddenly running with the big dogs in the blogosphere. Our post endorsing Hillary Clinton for president, with its insightful commentary on the avalanche of commentary on the candidate's laugh, is sitting pretty at #3 on BuzzFeed's list of "Twelve Best Links" on the topic. We're right behind Huff Po and ahead of the New York Times! Click on the link below, and then click back here from the BuzzFeed link. It'll thrill the guys in our Department of Clicks and Eyeballs, and it'll help keep us on the BuzzFeed list.

We're so flattered by the attention that the geeks in the Department of Toys and Widgets installed a BuzzFeed widget on the bottom of our front page. Sorry to put it way down on the bottom, but it wouldn't fit on the sidebar, unlike the cute new Clinton campaign widget we just tucked in over there. (Get on over to Clinton's web site, y'all. Didn't I tell you to get on the bandwagon?)

In other me-related news, Roxie's World has also been nominated for its very first Weblog Award, in the category of Best Pet Blog. With dog as my witness, I assure you the nomination did not come from anyone associated with Roxie's World or any of its subsidiaries. Click here, and scroll down until you see us on the list of nominations. Vote for us by clicking the + sign in the lower right-hand corner. I know you're supposed to say it's an honor just to be nominated -- and of course it is -- but wouldn't it be cool to win? I mean, gosh, kids, what an extraordinary validation that would be of the hard work we've been doing. What a wonderful way to let the world know there's more to pet blogs than goofy photographs and aww-inducing cute sayings. (I say this with love and due respect to all of my fellow dog bloggers, especially the legions of amazing wire-haired fox terrier bloggers. Paws up to all of you!)

All right, enough about me. Let's get back to the Girl Who Will Be President. Look at this fabulous photo of her with the Rapscallion Boy Who Once Was President: 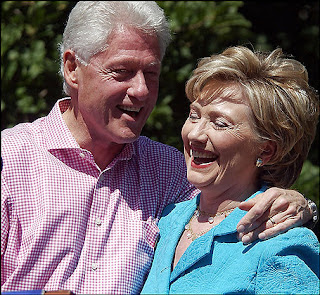 Tell me again how the Clintons totally hate one another and only stay together to advance their nefarious political ambitions. (Oh, yeah: Ending the war, establishing universal health coverage, battling AIDS in the developing world -- Scary stuff, isn't it?) More Wa Po polling data out this week suggests that voters are showing signs of falling hard for these two love birds. An analysis by Dan Balz and Jon Cohen has nothing but good news for the Clinton campaign. Here are the first few paragraphs:

Former president Bill Clinton has emerged as a clear asset in his wife's campaign for the White House, with Americans offering high ratings to his eight years in office and a solid majority saying they would be comfortable with him as first spouse, according to a new Washington Post-ABC News poll.

But Americans said they would not regard the election of Sen. Hillary Rodham Clinton (D-N.Y.) as simply the resumption of her husband's presidency. Instead, two-thirds said she would take her presidency in a different direction, and half of all Americans said they believed that would be a good development. About half of those who said it would be a resumption described that as positive.

The survey also showed Hillary Clinton with an early advantage in a matchup of the party front-runners. A majority of those polled support her over former New York mayor Rudolph W. Giuliani, who has reveled in taking swipes at Clinton in recent weeks and yesterday offered an unflattering comparison of her to 1972 Democratic nominee George S. McGovern.

Tell me again how Americans are suffering from a bad case of Clinton fatigue and are tired of seeing the presidency handed back and forth between the Bush and Clinton "dynasties." (There I go again, helping Maureen Dowd write her next mindless trashing of the Clintons.) Tell me again about Hillary's high negatives and all the ambivalence voters supposedly harbor toward the idea of a woman president. Tell me again how polarizing she is and how robotic she is and how pathetically Gore-like she is.

And I will tell you something: Voters know better.
Posted by Roxie Smith Lindemann at 11:13 AM