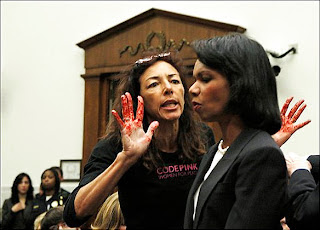 In the still of the night, a devoted new reader turns to everyone's favorite dog blogger for guidance. "Would love to hear your opinion on Code Pink's confrontation with Condi Rice," she writes. We assume she is referring to the moment captured in the photo above during Rice's testimony before the House Foreign Affairs Committee on Wednesday. Code Pink's Desiree Anita Ali-Fairooz, 50, managed to get past Rice's security guards and wave blood-colored hands in the secretary of state's face while shouting, "War criminal!" (Wa Po report on the incident is here.) (Huff Po has a link to AP video of it here.)

What is my opinion on this matter? So deeply do I feel the weight of my responsibility to hold forth on the questions that keep my readers awake at night that I have ordered my typist to stay in her bathrobe and help me to thrash this one out right away. She can brush her teeth later, much later perhaps.

On the one hand: Condoleezza Rice has sold her soul to perhaps the most criminal administration in American history. She has failed spectacularly in every position she has held in that administration and is only now being held to account for her negligent management of her department and lax oversight of security contractors in Iraq. (Details on that story here.) If anyone deserves public excoriation, surely it is she.

On the other hand: Roxie's World is generally opposed to rudeness, even toward people who totally deserve it, and to political stunts that aren't likely to do anything but make critics of the war and the administration look like lunatics. Appreciative though we are of extremism in defense of ending an unjust war, we've had doubts about Code Pink's tactics for a long time. Excoriating Rice is one thing, but excoriating Democrats who are making serious efforts to grapple with the strategic and political complexities of the war is another. We are firmly opposed to cutting off our noses to spite our faces.

On the other other hand: You know how we love our eye candy, and this photo is awesome eye candy. We love that in this shot Rice casts down her eyes to avoid seeing the bloodied hands of her accuser. We love that she is boxed into the picture by those very hands and that Ali-Fairooz's eyes occupy the center of the frame and seem to bore right into Rice's pinched little soul. We love the angle of the shot for making it seem there is barely a hair's breadth between the two women's eyes, noses, and mouths. Both mouths are open. It's easy to imagine the bloody hand reaching out and pulling Rice's face toward the face of the accuser, but for what -- a kiss? or some forced reckoning? Another shot shows the two women looking directly at each other. Rice looks contemptuous, Ali-Fairooz hysterical. This shot likely earns sympathy for Rice, the pearl-wearing professional being prevented from doing her job by a big-mouthed shrew who thinks a bottle of ketchup can stop a war.

Bottom line: In the battle of images, this one's a draw, but we give Code Pink credit for slipping past security to make a point. Anything that makes Condi Rice look publicly uncomfortable is all to the good as far as we're concerned.

Sleep well, gentle readers. Roxie's World is here to tell you what to think. All you have to do is ask.
Posted by Roxie Smith Lindemann at 9:37 AM