Be patient, kids. Some day soon, Roxie's World will return to its regular programming of sophomoric humor, shrewd analysis, and heart-warming glimpses into the wacky world of Moose, Goose, and Roxie. For the moment, though, my typist is awfully busy writing the aforementioned lecture on blogging, which, ironically, reduces the amount of time available for actually blogging. I could dictate posts into my Paw Pilot (TM: RW Enterprises, LLC), of course, but I've decided to take advantage of Moose's distraction and the rainy weather to catch up on my fall napping, which is crucial preparation for my winter hibernation. In the meantime, here are some pics, links, and updates on things we darn near overlooked in the busyness of the past couple of weeks.

Bhutto Death Watch Update: Former Pakistani prime minister Benazir Bhutto is still, incredibly, alive and is planning to start traveling around her country this weekend, despite new threats upon her life. AP reports today that Bhutto plans to travel to her hometown of Larkana on Saturday to pay homage at her father's tomb, about 270 miles northwest of Karachi. The report continues: "She has also indicated that she plans to travel to Lahore and the capital of Islamabad, despite her professed fear that she will be attacked again." Um, okay, Benazir. We greatly admire you, but we can't decide whether we should declare you the Brave One or the Crazy Lady with the Death Wish. Since my typist is pressed for time, I guess we'll go with the former because it's more succinct, but be careful out there, will you?

Peggy and Pam in Outer Space Update: Pam Flips for Peggy -- Then They Embrace. The space shuttle Discovery, captained by Pamela A. Melroy, docked at the International Space Station, commanded by Peggy A. Whitson, today after Melroy had executed a complicated backflip maneuver so the underside of the shuttle could be photographed and inspected for damage from liftoff. The docking was the first time both the shuttle and the space station were under the command of women. Here's the photo of Whitson welcoming Melroy to her high-flying palace for girl geeks: 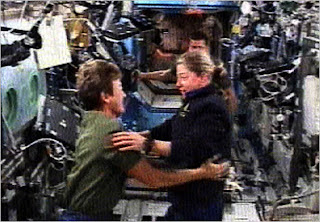 Speaking of Backflips: Senator Barack Obama is trying hard to justify his decision to campaign in South Carolina with an unapologetically homophobic minister, Donnie McClurkin. His latest attempt to disappear the issue was to release a letter from a group of LGBT and black leaders who artfully explain the move as part of the inclusiveness of Obama's campaign. How's this for knee-slapping political humor?

We believe that Barack Obama is constructing a tent big enough for LGBT Americans who know that their sexual orientation is an innate and treasured part of their being, and for African American ministers and citizens who believe that their religion prevents them from fully embracing their gay brothers and sisters. And if we are to confront our shared challenges we have to join together, build on common ground, and engage in a civil dialogue even when we disagree.

We also ask Senator Obama's critics to consider the alternatives. Would we prefer a candidate who ignores the realities in the African American community and cuts off millions of Blacks who believe things offensive to many Americans? Or a panderer who tells African Americans what they want to hear, at the expense of our gay brothers and sisters? Or would we rather stand with Barack Obama, who speaks truth in love to both sides, pulling no punches but foreclosing no opportunities to engage?

Dog Gone It, Ellen!: Somehow in the crush of the last couple of weeks, we neglected the amazing story of Ellen DeGeneres sobbing uncontrollably on her show over a dog that she had adopted and then given away (because of problems between the dog and her cats) being re-possessed by the pet adoption agency. Here's the vid:


Ellen, honey, we heart you big time for that whole bubbly-dyke-next-door routine you manage to play so convincingly, and of course we give a paws up to your love of animals. We do have one little piece of advice, though. When the adoption agency asked you how little Iggy was doing, all you had to say was, "Fine." Stop there, and the question has been truthfully answered and little Iggy gets to stay with your hairdresser. Stop there, and you don't have to do a blubber-fest on national television to try to get the adoption agency to relent and change its policy on giveaways. Stop there, and you don't look like a middle-aged lesbian neurotically invested in pets as surrogate children.