Happy National Coming Out Day, kids! Of course, every day is coming out day in Roxie's World, but we're pleased that other universes set aside some special time to celebrate sex and gender diversity. Funny that they do so while tolerating or actively promoting discrimination against lesbian, gay, bisexual, and transgender people, isn't it? Still, let's not be grumpy on such a special day. Let's throw up some links and dance! 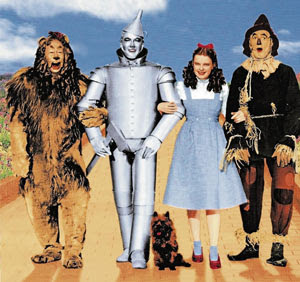 Having gained the coveted endorsement of Roxie's World, Hillary Clinton's campaign issued a statement today in support of NCOD. Here's a link, and here's the statement:

The simple act of declaring who you are has often been a moment of courage for many lesbian, gay, bisexual and transgendered (LGBT) Americans. National Coming Out Day honors the brave journey many have taken out of the closet. But even now, after so much progress has been made in the fight for equality and acceptance, many in the LGBT community continue to face discrimination and harassment.

As President, I will end the divisive politics of this administration and work to renew the promise of fairness for all Americans. This means supporting equal rights for gay and lesbian couples, ending Don’t Ask Don’t Tell and allowing patriotic Americans to serve their country, and finally signing into law the Employment Non-Discrimination Act and hate crimes legislation.

So on this day, twenty years after the Second March on Washington for Lesbian and Gay Rights, let us rededicate ourselves to the ideal that all Americans should be treated equally, no matter who you are or who you love.

(Aside from Moose to Hill: Do you promise that "equal rights for gay and lesbian couples" will mean that some day, in the tragic event of Goose's demise, I'll be able to claim Social Security survivor benefits? You don't have to call it "marriage" if you don't want to. Shoot, call it "Little Bo Peep," as Goose would say, but if it doesn't extend the full array of rights and benefits to same-sex couples that straight marriage includes, then it ain't "equal rights." Got that? But, you know, would it really be that hard to explain to the American people that the right to civil marriage ought to be available to couples irrespective of their genders? Oh, never mind.)

Thanks to qta for pointing us in the direction of Film Experience's "Queer Hollywood" post in honor of NCOD. It's long, cool, makes no mention of the neither in nor out Jodie Foster, and has a great photo of the sainted Lily Tomlin near the end of the post.

On a more local note, the Pride Alliance (undergraduate LGBT organization) at the University of Maryland celebrated NCOD by holding a rally in support of (finally) extending domestic partner benefits to LGBT staff and faculty. Moose made a little speech commending the students for being less patient than the grown-ups on campus have been during the protracted struggle for pay equity for the university's LGBT employees. She didn't mention that students were lobbying for the extension of a benefit that doesn't apply to them, which makes their activism even more impressive. How many times have you worked for a cause that wouldn't bring a direct benefit to you? Hmmmm? Here's a piece by Pride Alliance president C. J. Rock that was published in today's Diamondback, the student newspaper at UMD. It's tempting to quote that line from Isaiah about how a little child shall lead them, except there was nothing childish about the out and proud students of the University of Maryland today. I swear, kids, they brought tears to Moose's jaded old eyes.

Paws up and a pretty pink tiara to all the queers and friends of queers who are working for sex and gender justice this day and every day. Keep the faith, beloveds. Justice will roll down like waters -- as long as folks stand together to give it a good hard push.
Posted by Roxie Smith Lindemann at 8:25 PM