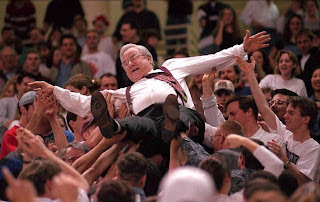 Close your eyes, loyal denizens of Roxie's World. Close your eyes, and imagine with me the Rev. Jerry Falwell's sudden leap into eternity on a Tuesday afternoon in May while alone in his office at Liberty University. (Wa Po coverage of Falwell's death yesterday at age 73 starts here. NY Times coverage begins here.)


It's a warm spring afternoon in Lynchburg, VA. The rev has, per usual, eaten heartily at lunch. Back in his office after the repast, a dull pain grips his chest. He rubs it distractedly, trying to dislodge a pocket of gas. Suddenly, a shot of searing hot pain throws him to the ground. His eyes open wide but see nothing, until, suddenly, he finds himself transported to an even warmer place. It's all, as Tony Kushner puts it at the end of Angels in America, Part One, "Very Steven Spielberg" in its epic scale and melodramatic sound and lighting effects. It's also very, very hot, but the rev is not alone. He is met at the entrance by a sweet-faced young man with a smile as bright as a thousand klieg lights.

Rev. Falwell: And so are you, which I suppose means that demented Phelps fellow is right about God hating fags, but what am I doing here?

Matthew Shepard: (laughing softly). Oh, no, Rev. Falwell. I was just sent down here to welcome you. I don't usually work here but, you know, up in the other place. Actually, it turns out that God doesn't hate fags, but He does have a wicked sense of humor and of poetic justice. So here I am. Welcome to Hell.

Rev. Falwell: But, but. . .why? I was a man of God, a warrior for Christ, a preacher of the Word. How could I have ended up here?

Matthew Shepard: Because you believed in a vengeful, angry God who casts sinners into places like this -- and you did so without grasping that your own venomous rage against those whose beliefs differed from yours was the greatest sin of all against a god who is, always and only, love. This place is the logical outcome of your years of condemnation and cruelty, of promoting hatred in God's name. (For lowlights of Falwell's career, see the archive Carpetbagger has assembled.) As Milton's Satan says in Paradise Lost, "Which way I fly is Hell; myself am Hell." Your Hell -- Welcome to it.

Matthew Shepard: Sorry, Rev. I gotta get back upstairs. Tea dance starts in a few minutes, and I could use a cool drink. Here, take this -- It might help to explain your predicament in terms you can understand. It's not what the guy upstairs believes, but it's in keeping with your theology. Perhaps you'll take some comfort in it.

Shepard hands Rev. Falwell a crisp copy of the famous sermon, "Sinners in the Hands of an Angry God," by the 18th-century Puritan divine, Jonathan Edwards. The following passage is underlined:

The God that holds you over the pit of hell, much as one holds a spider, or some loathsome insect over the fire, abhors you, and is dreadfully provoked: his wrath towards you burns like fire; he looks upon you as worthy of nothing else, but to be cast into the fire; he is of purer eyes than to bear to have you in his sight; you are ten thousand times more abominable in his eyes, than the most hateful venomous serpent is in ours. You have offended him infinitely more than ever a stubborn rebel did his prince; and yet it is nothing but his hand that holds you from falling into the fire every moment. It is to be ascribed to nothing else, that you did not go to hell the last night; that you was suffered to awake again in this world, after you closed your eyes to sleep. And there is no other reason to be given, why you have not dropped into hell since you arose in the morning, but that God's hand has held you up. There is no other reason to be given why you have not gone to hell, since you have sat here in the house of God, provoking his pure eyes by your sinful wicked manner of attending his solemn worship. Yea, there is nothing else that is to be given as a reason why you do not this very moment drop down into hell.

O sinner! Consider the fearful danger you are in: it is a great furnace of wrath, a wide and bottomless pit, full of the fire of wrath, that you are held over in the hand of that God, whose wrath is provoked and incensed as much against you, as against many of the damned in hell. You hang by a slender thread, with the flames of divine wrath flashing about it, and ready every moment to singe it, and burn it asunder; and you have no interest in any Mediator, and nothing to lay hold of to save yourself, nothing to keep off the flames of wrath, nothing of your own, nothing that you ever have done, nothing that you can do, to induce God to spare you one moment.

As Shepard turns to go, Falwell holds the document in his hands, stares at it, looks longingly at Shepard, and then back down at the piece of paper. As he reads, his hands begin to tremble.

"Myself am Hell," indeed.
Posted by Roxie Smith Lindemann at 5:23 AM