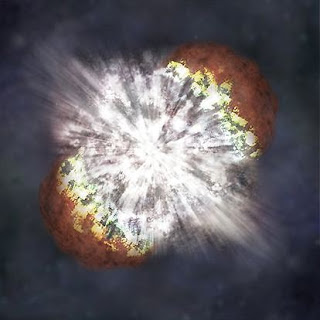 (Photo Credit: AP Photo/NASA, Chandra X-Ray Center,, M. Weiss. From Wa Po: "This artist's illustration provided by NASA shows what the brightest supernova ever recorded, known as SN 2006gy, may have looked like when it exploded. The star 'is a special kind of supernova that has never been seen before,' the discovery team leader Nathan Smith of the University of California at Berkeley told The Associated Press. 'It blew the core of the star apart, blew it into smithereens, sending all those heavy metals into space' at a speed of about 9.3 million miles per hour, Smith said. And it has been shining at levels brighter than other supernovae for several months, Smith said. The discovery was first made last September by a graduate student in Texas.")

(Read the Post piece on this supernova. It's fun to see astrophysicists so excited. Cool video, too.) 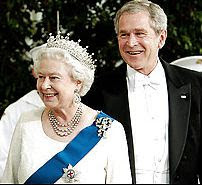 Our favorite suggestion from a dumb Post piece on what to say to the Queen: "I loved you as Helen Mirren." If you must, read the piece on the white-tie state dinner for the Queen at the White House. We love you anyway, you pathetic Anglophile. Speaking of fading, latest Newsweek poll has Bush's approval rating at 28%. And he still couldn't take a good, hard, public swig off all that fine wine at last night's dinner. Poor Shrub!

Neil Young nailed it many years ago:


Some not quite random links (because it's the last week of classes and Moose doesn't have time to type):

That's it for now, kids. Catch you on the weekend.
Posted by Roxie Smith Lindemann at 8:11 PM