News from the Trail 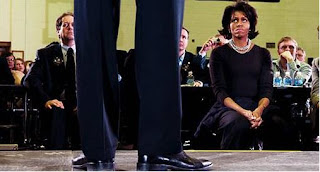 Happy Mother's Day! Last year, Mother's Day fell on Goose's birthday, which is tomorrow this year, if that makes sense and doesn't make your head spin. (To see one of the most adorable photographs ever taken of yours truly and to read the touching poem I wrote for Goose on Mother's Day last year, please click here.) We've had a quiet celebration of Roxie Has Two Mommies Day here in Roxie's World. The moms had a big party last night, and I spent much of the evening tolerating the attention of young children who seemed to think that a terrier's tail is a convenient carrying device, so I've been a little sleepy today. It's gorgeous here, though, so I sent the moms off on a four-mile walk while I curled up for a restorative nap. They came home, as they often do, with news of the 'hood and of the larger world, because that's the way their brains work when they are walking and talking out on my trail.

Today's topic is political partnerships. During their walk, the moms ran into a couple of our favorite neighbors, an African-American mother and daughter who have separate houses within a block or two of us and one another. We are especially fond of them because they are especially fond of ME. They are always inquiring after my health and prayed fervently for my recovery when I was so sick last year. Somehow, the conversation turned to politics. Perhaps it was because Moose was wearing her thought-provoking "Stop Bitching and Start a Revolution" tee-shirt. (See photo here. Purchase shirts here.) Barbara, the mom, announced with a smile that she loves Bill Clinton and plans to support Hillary in order to get him back in the White House. A lengthy discussion ensued about the charm and wisdom of the forty-second president and the impressive command of the issues shown by the junior senator from New York in the recent Democratic candidates' debate. Everyone laughed when Moose said that Bill Clinton is one of the few men in America who would be comfortable in the role of first male First Lady. (Apparently, the First Gentleman of Michigan, husband of Girl Gov Jennifer Granholm, is not always at ease in that role. Here is an Eleanor Clift piece that speculates on the role Bill might play in a Hillary administration by focusing on Granholm's husband Daniel Granholm Mulhern. Clift also cites a Gallup poll showing that 7 in 10 Americans think Bill would be "mostly helpful" to his wife should she win the presidency.)

Interestingly, the name "Barack Obama" did not come up in the course of the moms' conversation with our neighbors. They said good-bye and proceeded on their walk, thinking out loud together as they so often do about politics, gender, race, and the mostly ridiculous ways such complex issues are covered in the American news media. The moms have not yet taken an official position on any of the Democratic candidates for president. (Loyal fans will recall that Roxie's World endorsed Al Gore just about a year ago.) However, Goose has been expressing serious "Where's the beef?" doubts about Obama recently, and Moose was more than a little annoyed with a Post profile of Michelle Obama that talked about her recent decision to quit her job in order to campaign fulltime for her husband. Moose respects that decision but was bothered by Obama's all too predictable mealy-mouthed response to the question of whether she considers herself a feminist.

Oh, thanks, Michelle, and you "probably" wouldn't want to label yourself pro-choice or pro-same sex marriage or anti-war, would you? Thanks for the profile in political courage. Funny, in the photo we ran at the top of this post, the one of you gazing up at your husband as political wives have done from time immemorial, you're sitting up so straight we figured you actually had a spine. Guess not! Wouldn't want to offend anyone by taking a stand, would we?

Here's the thing: The media are framing the Democratic campaign as a battle between Obama and Clinton. It's race versus gender, pretty boy versus scary girl, platitudes versus policy. Obama will have to do more than look and sound good to earn the support of Roxie's World and the smart women my moms ran into out on the trail. Smooth talker that he is, he is going to have to take positions, flesh out policies, and be brave enough to embrace a label or two, or he runs the risk of being dismissed as a lightweight. If that happens, the wonky woman with the rapscallion husband we hate ourselves for adoring will waltz back into the White House as the first Chick Prez and non-lady First Lady. They'll make history, and Michelle Obama can go back to work.

You heard it here first, kids. Roxie's World says the girl is going to win. (That is a prediction, not an endorsement, so don't get your knickers in a wad. Just stay tuned.)
Posted by Roxie Smith Lindemann at 4:42 PM