Send In the Twins 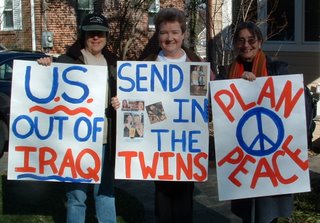 First things first: A heart-felt apology to my legions of loyal fans for the unconscionable delay between posts. Per usual, it's my moms' fault. I won't say things have been stressful for them lately, but they did go see Kathleen Turner the other night in the stunning revival of Edward Albee's Who's Afraid of Virginia Woolf? and left the theater howling with delight. "What an utterly charming romantic comedy!" Moose said to Goose. To which Goose replied, "Oh, yes, and one based on a couple just like us--together for 23 years and 6 years apart in age! It's so seldom you see a great love story focused on middle-aged characters!" "You are so right, Goose. And, just like us, George and Martha had mutual interests and activities that kept their relationship fresh--the drinking, the verbal jousting, the comments about aging, the drinking. I'm surprised we never decided to have an imaginary baby. I think we would have been good at that, don't you?"

As I've told you before, my moms are weird, but I'm glad that instead of an imaginary baby they had a real dog. I'm also glad that one of the shared interests that has kept their relationship fresh as a daisy (and slightly less combustible than George and Martha's) is a passion for peace and liberal politics. (Yes, liberal. My moms think the term progressive is a wienie-word that evades noble Democratic traditions of expanding rights, shared responsibilities, and international cooperation that we ought to be proud to claim.) So of course they hopped on a Metro train yesterday for the big anti-war protest in downtown Washington. My moms just love a good demo, and yesterday's was delightful. The day was sunny and warm, the company was congenial, and the crowd was impressive. Several fans and citizens of Roxie's World were there, including my Official Gay Stalker, the Man Who Will Cure Cancer, Aaron the Anatomically Obsessed Six-Year-Old (and his grandmother), Margie the Eco-Warrior, and Alicia, my Favorite Poet Against the War. They got there in time to hear most of the speeches, including those by Maxine Waters and Jane Fonda, which were especially righteous and moving. They were able to march together without too much difficulty. They kept running into a sizable contingent of folks from Code Pink as well as an impressive group of large-headed papier-mache puppets of Bush, Cheney, Rumsfeld, and Rice dressed in prison stripes and all chained together. They saw many clever signs, a lot of sad and angry ones, and one tee-shirt that said Vagina Warrior, which provoked squeals of glee from the Anatomically Obsessed Six-Year Old. All along the route, people kept stopping Moose to photograph her "Send in the Twins" sign, which of course delighted her endlessly. She thinks it's one of her best posters ever. 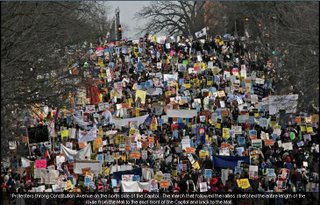 Roxie's World will not get into the debate about how big the march was, though Margie, who has done a lot of marching in her day, estimated it at about 200,000. From a political standpoint, it's probably more important that the visuals were compelling and that the march is being followed up by a day of lobbying Congress on Monday. Another thing that really impressed Margie, Moose, and Goose (or, as Moose sardonically termed their mini-contingent, the Hormonally Unbalanced Radicals for Peace) were the large numbers of young people in the crowd who weren't there because their aging hippie parents had dragged them along. The Post even had a separate article devoted to youth involvement in the anti-war movement. It reports that, "Many students mentioned the case of Ehren Watada -- the U.S. Army lieutenant facing a court martial for refusing to deploy to Iraq -- as an important step in building a cohesive antiwar movement."

Roxie's World is proud to celebrate all fighters for peace and all those who inspire others to get up off their couches and take a stand for a better world. We give yesterday's march a Five-Paw Rating and an enthusiastic Roxie's World Seal of Approval. But remember, kids, a march is not a movement, and a good slogan never ended a war. March today, but be ready to work your hearts tomorrow--and tomorrow--and tomorrow. . . . 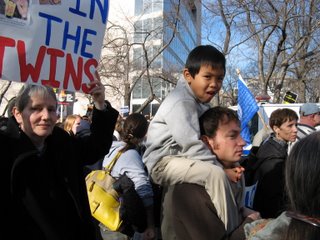