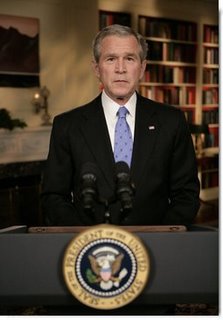 The president seems to be shrinking again. Here he is in the White House library Wednesday night, making a speech he had put off and put off, like some desperate undergrad hoping against hope that he might find a dog to eat his homework. Sorry, Shrub, not even Barney would take a bite out of the load of hooey you tried to foist off on the American people this time. The latest "new way forward in Iraq" sounds so old and backward that even Republicans are fleeing from it in droves. The Times and the Post both have stories today on the every-man-for-himself mentality that has taken hold among Republicans, who realize Bush's war is a lost cause that has already cost them their majorities in Congress. They are voting for popular Democratic proposals faster than you can say "poll-obsessed, flip-flopping, former theo-con who now thinks global warming is real and negotiating with drug companies for lower prices is a brilliant idea." This spectacle would be fun to watch if it weren't for the fact that American kids and Iraqi civilians will keep dying while Bush and his cronies look for new ways to cover their backsides and postpone the inevitable for two more years.

Bush isn't the only one who was bedeviled this week by pesky enemies who made him seem small and weak. My beloved Lady Terps, reigning national champions and owners of the longest active winning streak in Division I college basketball, traveled to Durham for a re-match with the Duke Blue Devils, whom they last faced in the championship game last April. For the Terps, the reunion wasn't pretty, as Duke's suffocating defense held Maryland to 37.8 percent shooting. The Blue Devils prevailed 81-62, leaving Maryland coach Brenda Frese to say, graciously and succinctly, "This game we were outworked, outhustled, outplayed, outcoached, you name it." 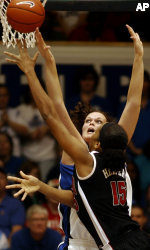 Coach B. hits the nail right on the head. My moms and their new pals over at DC BasketCases, the best darn Washington-area women's basketball blog on the internets, hope the Terps will embrace their stinging loss as an opportunity to learn, to grow, and to kick some serious butt when they face the Blue Devils again on Feb. 18. For a good example of how to bounce back from a bitter defeat, the Lady Terps need only look to that other team with a national championship trophy in the Comcast Center, the non-lady Terps. The Maryland men's team this week suffered an ugly loss to the Miami Hurricanes at home on Wednesday night. (My moms were there. How ugly was it? Judging by the looks on the moms' faces when they got home, I'd say it was as ugly as the boil George Bush got on his face during the Florida recount. Remember that? I do.) Anyway, the boys bounced right back on Saturday, defeating the 17th-ranked Clemson Tigers, the only undefeated team left in men's Division I basketball. The men needed the victory to avoid a disastrous 0-3 start in ACC play, and they got it thanks to a season high 62.7 percent shooting and strong rebounding against the ACC's best offensive rebounding team. We don't know if they answered all the questions that might be raised about them (since the boy Terps in the last couple of seasons have shown a tendency to win big games and let little ones slip away), but we're pleased with the win and hope this team really is ready to take Maryland back to the NCAA tournament.

Basketball is like life, kids. If you don't fear the turtle, you just don't know the score.
Posted by Roxie Smith Lindemann at 2:58 PM