Notes on a Stereotype

Spoiler Alert: If you haven't yet seen Notes on a Scandal, you might want to skip this post for now. Maybe you could re-visit some of my holiday posts and try to decide whether you like me better in my reindeer tiara or my oh-so-naughty "Happy F-ing New Year!" tiara. Or, maybe you should shut down the computer and head out to your local cineplex to see Notes so that you can join in on the debate my moms are about to launch. Don't say I didn't warn you: Spoilers and rants ahead. 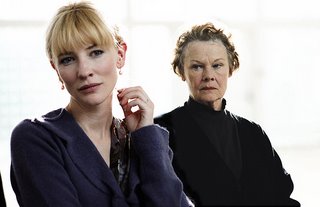 My moms go on lots of dates in January. It's a time of year when one of them will say, "I've got to go downtown and get a haircut this afternoon. Want to me meet me after for a movie and an early dinner?" and the other, instead of hemming and hawing about how much work she has to do, will say, "Sure. What's playing?" Thus it was that on Friday they caught a late afternoon showing of Richard Eyre's creepy, riveting Notes on a Scandal, starring Judi Dench and Cate Blanchett. (Pause for a scene-setting bit of local gossip: Just as the trailers were about to start, PBS reporter Gwen Ifill and a female companion came and sat down right next to Moose and Goose. The moms were thrilled. They just love rubbing shoulders with the kinda famous people one tends to see at the movies in Washington.)

My moms are suckers for a good story, and they like nothing better than spending a couple of hours in the dark with women who are as smart, talented, and gorgeous as Dench and Blanchett are (even though Dench bends over backwards to be the opposite of gorgeous in this role. She succeeds admirably. Wait for the bathtub scene. Look at her upper arms. You'll probably race from the theater to the gym to start a weight-lifting program. Props to Dame Judi for letting them film her aging female body in all its un-nipped or -tucked glory.).

The tale is gripping, as Dench's Barbara Covett and Blanchett's Sheba Hart (love the subtly allegorical names, eh?) are drawn not into friendship but into a twisted nest of co-dependency, power struggle, sexual intrigue, and multiple betrayals. The two women meet on the first day of a new term in a dysfunctional high school in inner-city London. Dench plays a battle-ax history teacher who holds her students and her colleagues in utter contempt, while Blanchett is a novice art teacher who is bored with her bourgeois married-with-children life but clueless about how to run a classroom. Searching for a gem among her unruly students (Barbara calls them "feral"), Sheba gets entangled with a horny fifteen-year old boy. Barbara soon discovers the affair and realizes she can use the knowledge to gain control of Sheba and command a semblance of devotion from her. Not surprisingly, complications ensue. Horny boys show up at inconvenient times. Families get suspicious. Cats die. Secrets come out, with a little help from the bitter, grief-stricken cat owners who are supposed to keep them. Jobs are lost. Someone goes to jail. Someone else goes to the park. No one looks noble, though the child with Down syndrome at least seems fully innocent.

Luminous peformances, a great script, a haunting score by Philip Glass--What's not to love about Notes on a Scandal? Why did my moms walk out saying they felt deeply conflicted about this film? My moms are the opposite of image-nazis. They don't go to the movies expecting (or even wanting) to see positive role models and happy endings, but they were bothered by how fully invested Notes on a Scandal turned out to be in the trope of the predatory repressed lesbian. One could argue that as the adult in a sexual relationship with a "child," Sheba, too, is a predator, though the film is clear that her lover Steven instigates their affair and that Sheba's chief moral failing is her inability to stop it. Sheba seems less a predator than a selfish fool who misses the "fuck fests" (as she describes her early relationship with her husband to Barbara) of her youth. In the film's last glimpse of her, Sheba is shown in a tabloid photograph being sent off to jail with her forgiving husband at her side. She has been convicted of a crime, but she has been fully restored to "normal," marital heterosexuality.

Barbara, on the other hand, is the unredeemed and irredeemable sex criminal of Notes on a Scandal. The word "lesbian" is never spoken in the film, a sign of how deeply phobic its structuring of female same-sex eroticism is. In the moral panic whipped up by the revelation of Sheba's affair, Barbara is forced to resign from her job. The headmaster threatens to reveal a previous incident in which another woman teacher, Jennifer, sought a restraining order against Barbara, who had obsessively stalked her much as she has been stalking Sheba throughout the film. The film ends with Barbara moving in on her next target, a young woman who vaguely resembles Sheba and gets drawn into conversation when Barbara notes that she knew the woman who is the subject of the lurid tabloid headlines she is reading. Called a vampire earlier (and we all know that female vampires are lesbians, right?), Barbara has her fangs out in the end, getting ready to strike again. Sheba has been rehabilitated. Barbara is the damned recidivist. She is damned by the tormenting power of a sexuality neither she nor the film is willing to name.

Or that's what my moms say anyway, and their reaction is similar to commentary by Malinda Lo that my Aunt Katie was kind enough to pass along. Our pal Damion over at Queering the Apparatus had a different take on the film when he saw a preview of it in November (and you know we put great stock in what Damion has to say about film). We share Damion's awe for the performances, but the film's artistry is itself problematic because, as Lo points out, the performances have such a strong ring of truth that they forestall critical examination of the toxic stereotype that serves as the story's central narrative trope. And even if we don't go to the movies in search of positive queer images, it's disheartening that last year mainstream audiences thrilled to Brokeback Mountain, which presented same-sex love as sweet but doomed to a violent end, while this year they'll flock to a morality play that depicts same-sex desire not as victimized but as pathetically, inevitably victimizing.

I think I'm going to go to Hollywood and pitch a movie about my moms. Maybe I'll call it Notes on Twenty-Three Years of Queer Delight (Thirteen of Which Included a Really Cute Dog). Whaddyathink, kids? Could I sell that script and quit my day job as a world-class squirrel chaser?
Posted by Roxie Smith Lindemann at 4:56 PM