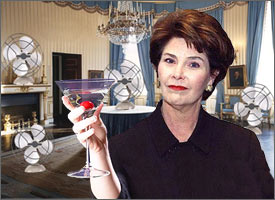 Today is Laura Bush's sixtieth birthday. Let's put a paw in the air and TOAST her longevity, her astonishing ability to aid and abet the evils of her husband's administration with a steely smile on her face and a pack of cigs close at hand. To celebrate, we've got a special birthday greeting to the nation's most famous unemployed librarian from the ageless and evergreen First Lady of Popular Music, Ms. Barbra Streisand. Put on your dancing shoes, and click on this link.

On this Saturday before the midterm elections, Roxie's World has a few predictions to make about who'll be TOAST on Tuesday. We're not going out on a limb to suggest that we should prepare to say a heart-felt BYE-BYE to Pennsylvania Senator "Man on Dog" Rick Santorum, but we're also willing to venture that Virginia Senator "Macacawitz" George Allen will be looking for a ghost-writer to write his memoir come Wednesday morning. (Too bad Jim Webb will be too busy being a senator to take on that job, eh?) Moose is hoping Dems will pick up some House seats in her home state of Indiana, even if some of those races have tightened up considerably in the last week or so.

We're not making any predictions about Dems taking back the Senate, and we're still nervous as heck about our home state of Maryland, but we've got some helpful decorating ideas for Nancy Pelosi, assuming she's through "measuring the drapes" in the speaker's office. (Do you think they really do that? Don't you think it's likely they've got those measurements on file somewhere? Of course, after six years of iron-fisted Republican rule, such information is probably classified, and fabric shops in Georgetown are probably under strict orders not to take orders from Democrats. Forget the drapes, Nancy. Let's go with some nice wood blinds. Drapes are just filthy dust-catchers anyway, and they'd undermine your platform of clean government.)

What do you think, loyal fans? Will Tuesday be a tidal wave that sweeps Republicans out of office from coast to coast, or will it be a tempest in a teapot that fails to dislodge the smirk on Karl Rove's puffy face? Will the sleeping giant of the American middle class at long last awaken from the coma of voting against its own interests? Will the machines work? Will the votes get counted? Is there a snowball's chance in hell that the odious Virginia marriage amendment will be defeated? Roxie's World is dying to know what you think.

Oh, one more piece of TOAST on the non-political domestic front: Moose and Goose's beloved ten-year old Subaru may be on its way to automotive heaven. Goose was hit last Friday at the (dangerous) intersection of Larch and New Hampshire Avenues. Goose wasn't hurt, thank goodness, and the damage didn't seem to be that serious, but State Farm wants to declare it a total loss and give them $5700. Not bad for an old car, but Moose is sad. She's kind of sentimental about the big green wagon, which has been a reliable war-horse of a vehicle
that was great to have around back when Moose and Goose were buying (and hauling) sinks, toilets, and light fixtures on a daily basis. They've found someone who says he can fix the car for $3400, so we're planning to light a fire, crack open a bottle of wine, and try to decide whether to fix it or get the family a sweet new Prius for Christmas. Once again, fans, your opinions are welcome.

Right now, though, we need to go cheer on the Terps, who are trying to knock off #19 Clemson down in South Carolina. Go, Terps--TOAST those Tigers!
Posted by Roxie Smith Lindemann at 11:57 AM