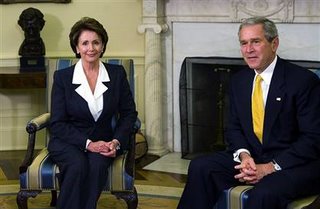 Well my soul checked out missing as I sat listening
To the hours and minutes tickin' away
Yeah, just sittin' around waitin' for my life to begin
While it was all just slippin away.
I'm tired of waitin' for tomorrow to come
Or that train to come roarin' round the bend.
I got a new suit of clothes a pretty red rose
And a woman I can call my friend

You know there are better days ahead, fans and fellow citizens of Roxie's World, now that a fabulous grrrl like Nancy Pelosi is going to be sittin' pretty behind poor old George W. Bush for the last two years of his spectacularly failed presidency. We hope you're still savoring the many victories of this past Tuesday and that you noticed Roxie's World was spot on in its maiden efforts at political prognostication, to wit:

Our only mistake was to be nervous about our home state of Maryland, which, as it turned out, went from sky blue to cobalt on Tuesday. Puppy-loving, "what, me, a Republican?" Michael Steele lost by ten points (54% to 44%) to our new favorite political nerd, Ben Cardin, in the race for senator, while Baltimore mayor Martin O'Malley turned Bob Ehrlich and his incredibly annoying family out of the governor's mansion with a 7-point (53%-46%) victory. We heart O'Malley in part because he spoke passionately throughout the campaign about the importance of making higher education affordable and accessible in Maryland, but also because O'Malley is a huge fan of our beloved Bruce Springsteen. Click here to read about O'Malley's use of the Boss's music and his thoughts on citizen activism out on the campaign trail. Rock on, Gov. Let's make the Free State our own "land of hope and dreams."

Now that we've proven our mettle as prognosticators, Roxie's World has a word or two to offer by way of political analysis. How do we explain the shift in the political ground that took place in the United States on Tuesday? Here, in no particular order, are our best guesses:

Let us know why YOU think Dems won. As always, Roxie's World is eager to hear from you. Meantime, kids, it's back to our happy dancing. :-)
Posted by Roxie Smith Lindemann at 2:24 PM