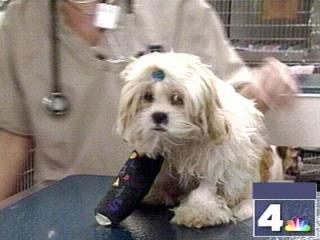 Fans of Roxie's World could be forgiven for occasionally forgetting that this is in fact a dog blog. (There are a lot of us out there in the blogosphere. Try Googling the phrase "dog blog" and see what happens.) What with all the carrying on about politics, basketball, and pop culture, not to mention the occasional usage of a phrase like "the vertigo of the signifier torn loose from the signified," you might even think that my moms the English profs occasionally do more than type for me. This possibility came to my attention recently when one of my most devoted fans (I might even call him the Official Gay Stalker of Roxie's World) said he read one of my posts and grew concerned that Moose (rather than yours truly) suffered from a seasonal skin allergy to autumn leaves. Thank you, Jason, for making me realize we might be having persona management issues here at Roxie's World.

So, let's get this straight: I am a dog. I do all the writing here. I am passionate about politics, basketball, and pop culture because I am an exceptionally intelligent dog who spends quite a bit of time on the couch beside my moms in front of our plasma TV. We have digital cable. With premium channels. Mind you, I'm not bragging or anything, just trying to explain the extraordinary range of my interests and knowledge.

Still, being a dog, I do care about dogs and dog issues. Which is why NBC4, the Washington DC affiliate of NBC, is my all-time favorite TV station. Aside from great on-air personalities (the sardonic/maternal Doreen Gentzler, the sardonic/slutty Wendy Rieger, and the new weather guy whom we call Hispanic Eddie Munster), they do a lot of great dog stories on News4. It's like Animal Planet with weather, traffic, and the occasional murder story. George Michael, head sports dude, is a major dog person, so every year he covers the glorious Westminster Dog Show (which, as my devoted fans know, has been won by Wire-Haired Fox Terriers a record thirteen times). He also stages an annual event, right there in the studio, called the Terrier Races, a hilarious and amazing event in which mostly Jack Russell terriers run around a track at warp speed. This year's race airs live tonight at 5:50 on NBC4, but you can also watch it via webstream from here. You GOTTA see this, people! It's more fun than watching the Democrats squander their moment of triumph in a petty leadership battle!

In other canine news, also featured on NBC4, there is the made-for-the-holidays story of Max, a heroic Shih Tzu, who took a bullet for a young child--and now is in need of a new owner! (See photo above.) This past Saturday night, according to News4, Max "was in the arms of a young boy when shots rang out on a Northeast corner in D.C. One man was killed and three other people were also hit in the gunfire. The 4-month-old-puppy was hit in the leg by a bullet that could have easily killed the young boy who was holding him. The child was never hurt." Unfortunately, the surgery that was needed to repair Max's injury was so expensive that his family had to put him up for adoption. (Read the full story on Max here.) The Washington Humane Society stepped in to cover the costs of the surgery and is now helping to find Max a permanent home. (You can donate to the WHS here.)

Can you resist those eyes, good-hearted citizens of Roxie's World? Can you resist the big cast, with its "Happy Holidays" message, on that tiny little leg? Can you say no to the tiniest little canine super-hero of them all--when YOU have so much to be thankful for this holiday season?

I know you can't. I know you'll do the right thing, but right now I gotta run--the Terrier Races start in less than fifteen minutes! Race ya to the couch, sports fans! 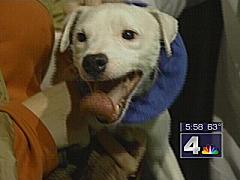