Question of the Day: How could a university president hired from the outside who's only been on the job for two years inspire such fierce loyalty that faculty, students, staff, and alumni from all over the state would interrupt their lives and summers to stage a mass insurrection against an ill-conceived and badly managed plot by a corporate board to force her to resign?

Answer for the Ages: It's right here, in a WaPo story on how hard University of Virginia President Teresa Sullivan, a leader with a "relationship-based, relationship-centered presidency," worked in those two years to win hearts and minds in Charlottesville. You should go read the whole story, but here's the money quote:


From the start, Sullivan outlined what she called “Sullivan’s laws”: Never surprise an administrator. Never punish the messenger. Don’t hide bad news; meet it head-on. People and time are our greatest resources; don’t waste them. When dealing with a difficult matter, don’t leave anyone out, or else be prepared for fallout.

We'll pause here briefly while you all swoon over such inspiring common sense from an academic administrator who gets that strong, effective leadership is first and foremost about listening. And honesty. Crazy! No wonder they wanted to dump her!

Also, however, I'm thinking someone should take that sentence about dealing with difficult matters and needlepoint it onto a pillow for Rector Helen Dragas, who could definitely use a lesson or two in fallout avoidance. Don't leave anyone out, especially if the person you are thinking of leaving out is, like, a rockstar/goddess among the group of people who will be most affected by the decision you are secretly engineering! Why? Because inclusivity is cheaper than paying Hill & Knowlton to clean up your mess!

AnyHoos, UVA's Board of Visitors meets at 3 this afternoon to vote on Sullivan's possible reinstatement. (WaPo games out how the voting is likely to go here.) Paws and fingers in Roxie's World are crossed that cool heads and common sense will prevail as the Board goes for its big do-over. We recommend that you follow the action on Twitter, which has been an amazing source of real-time information throughout the crisis at UVA. Even if you are not among the Twitterati, you can search on the hashtag #UVA for the latest tweets. By the way, WaPo has done a swell job on this story. You'd almost think they were still a serious newspaper, with actual reporters and everything. Srsly. Props to higher education reporters Daniel de Vise, Jenna Johnson, Anita Kumar, and Donna St. George for thorough, thoughtful coverage.

Peace out, Jeffersonians, and if there's any doubt as to where this blog stands on the matter of The People v. Helen Dragas, let us dispel it now: 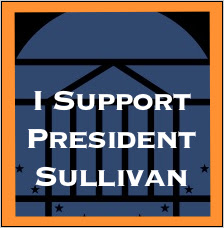 Posted by Roxie Smith Lindemann at 11:51 AM