Portion size has been on the nation's mind lately in the wake of New York Mayor Michael Bloomberg's proposal to ban the sale of sugary drinks over 16 ounces from restaurants and movie theaters (but not from stores that sell, you know, Big Gulps).

Portion size has been on Moose's mind lately, too, as she approaches the one-year anniversary of her success on her Lifestyle Adjustment Program. (She reached her official target weight in mid-July, though she dropped another ten pounds during her first couple of months on maintenance.) I think we'll let her weigh in, as it were, on the whole issue of nutri-nannyism, since healthy, happy eating and drinking are kind of her beat these days. Take it away, Moose!

* * *
Thanks, Rox. Let's cut right to the chase. Does Mayor Bloomberg's proposal make sense as a matter of public policy? Does the state -- or, in this case, the city -- have a right to set limits on consumer choice in the interest of combatting obesity and the health risks associated with it? (NB: The Department of Lifestyle Adjustment here in Roxie's World disapproves of phrases like combatting obesity, because we don't like war metaphors or eliminationist rhetoric. We use the term here because it shows up all the time in coverage of weight and public health. See for example the lead paragraph on this story about Bloomberg's proposal). Our good buddy Tenured Radical did a post the other day that argued in favor of the proposal as an appropriate use of the government's power to regulate trade, promote health, and protect consumers from the food and beverage industries' efforts to boost profits by pushing ever larger portion sizes off on the hungry, thirsty public. Go read that post for TR's excellent links and for yet another example of just how nasty commenters over at The Chronicle of Higher Education can get when their dander is up, which it generally seems to be.

It's easy to see why Bloomberg's proposal raises hackles. It reaches right into the heart of the great American ambivalence about government, activating our knee-jerk inclination to condemn anything that appears to limit a freedom that we like to pretend is or should be absolutely unfettered. It also underscores the tendency in our market-dominated world to assume that consumer sovereignty is the only form of sovereignty there is. Law prof (and current head of the White House Office of Information and Regulatory Affairs) Cass Sunstein argues in his book Republic.com 2.0 that consumer sovereignty -- i.e., the freedom to buy and consume whatever we want -- is not nearly as important or robust as political sovereignty -- i.e., our right and responsibility to participate in democratic self-government. Our tendency to overvalue consumer sovereignty and to confuse it with political sovereignty helps to explain why knickers get wadded over any perceived threat to our inalienable right to have whatever the heck we want whenever the heck we want it.

Philosophically, I stand with Bloomberg, TR, and others who say government has the right to set the kind of limits on consumer choice that the sugary drink proposal would set. I mean, look, I'm as freedom-loving as the next gal, but I fail to see a threat to the American Way of Life in this idea. I know, if it turns out Starbucks won't be able to sell the 24-ounce (and 510-calorie) version of its Caramel Frappuccino we'll be in a different ballgame and New Yorkers will be justified in fighting back with all they've got. For now, though, I'm thinking Bloomberg's proposal represents a significantly smaller threat to liberty than, say, state-ordered transvaginal ultrasounds.

I can also personally vouch for the effectiveness of limiting portion size as a way to manage weight. A year ago, people were constantly asking me how I lost more than fifty pounds. These days, they're asking me how I've succeeded, so far, in keeping it off. Portion control is an important part of the answer to both questions. (The other part of the answer is physical activity, but that would be the subject of another post.) Day in, day out, the single most important adjustment I've made to my lifestyle in the past year and a half is represented in the picture below: 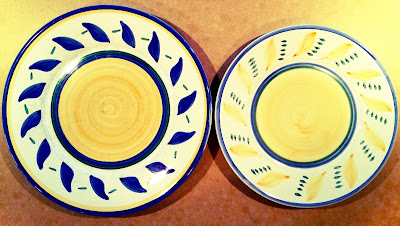 On the left is the plate we used to use for most of the (non-entertainment) meals served in Roxie's World. It's 11-1/4" in diameter. On the right is the plate we started using in January of 2011 when I started trying to lose weight. It's 9-3/4" in diameter. The switch to a smaller plate has been enormously helpful to my efforts to eat mindfully and well. The smaller plate looks full with less food, and that look of abundance is a powerful visual cue that I am getting enough to eat. I'm not starving or denying myself the pleasures of the table. When the plate is empty, I am finished eating, though I'll admit to still taking the occasional bite or two off of Goose's plate. (Her eyes are bigger than her stomach. Also: I am not perfect.) I don't go back for seconds, which I think is the logic of Bloomberg's proposal: Limit portion sizes to 16 ounces, and the vast majority of people aren't going to go back for more. They'll be satisfied with less and the risk of damage to their health from the garbage-laden calories in sugary beverages will have been lowered. (By the way, science backs me and the mayor up on the benefit of using smaller serving dishes. Check out this fascinating study on how even a group of nutrition experts were fooled about how much food they were getting when they ate out of larger bowls.)

So, I agree that government has the right to set such limits and acknowledge that fighting portion creep has been essential to my own efforts to reach and maintain a healthy weight. Why, then, do I nonetheless find myself doubting the wisdom of Mayor Bloomberg's proposal? It's partly, I suppose, that the idea seems so vulnerable to the kind of mockery that has in fact greeted it. It's just too easy to make it sound ridiculous, which aids and abets conservative efforts to depict all government regulation that doesn't involve women's wombs as nanny-like intrusions into the lives of citizens. More importantly, though, I'm also not convinced that the plan, well intended as it is, would have a significant effect on the problem it hopes to address. People who want to consume ridiculous amounts of sugary beverages will still be able to do so by ordering several of the 16-ounce servings available in restaurants and movie theaters or by stopping off at 7-Eleven for a Big Gulp. (Grocery stores are exempt from the proposed limit on serving sizes.)

The proposal seems doomed to fail if it isn't accompanied by an education campaign aimed at moving consumers toward healthier choices and then assuring they have access to healthier products. It's great to give consumers some measure of protection from the relentless, well financed, and government subsidized efforts of soda makers to "drive more ounces into more bodies more often," as a former marketing executive for Coca-Cola put it at a "National Soda Summit" held in Washington last week. It's just as important, however, to go about this work in a way that doesn't make overweight people feel judged, ostracized, or condescended to, and Michael Bloomberg doesn't always come across as someone whose cup, whatever its size, runs over with empathy. I'm not a nutritionist or a public health expert, but here's a link to some constructive ideas from a bunch of folks who are on how we might more effectively help the public to achieve a healthy weight. Go check out their ideas and then come back here and we'll chat about portion creep, public health, or whatever else might be on your mind. I've just taken a big gulp of cool, refreshing tap water, and now it's time to go take the sweetest girl on dog's earth out for an evening stroll. That sounds like a healthy, happy choice, doesn't it? See ya later, kids. Peace out.
Posted by Roxie Smith Lindemann at 6:52 PM