Here is the rear bumper of the official old car of Roxie's World, about 15 minutes ago: 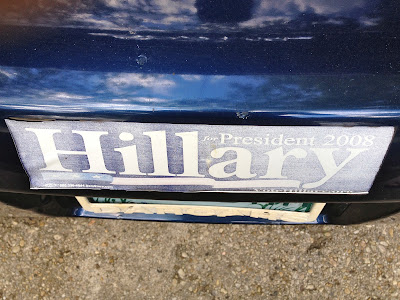 And here is that same bumper, about 12 minutes ago: 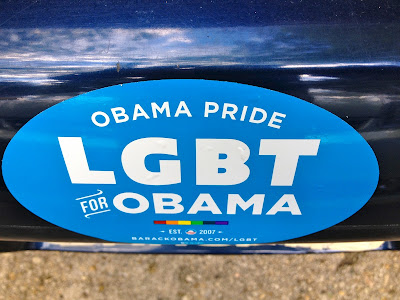 Yes, dears, it's official. Barack Obama has captured the prize that eluded him in 2008: the coveted endorsement of America's favorite dead dog blog devoted to politics, pop culture, and basketball. What? You thought we'd stay on the sidelines, waiting to see if the rumor that will not die will come true and Obama will beg Hillary Clinton to quit trying to save the world and focus on saving his reelection campaign by becoming his vice president? That ain't happening, kids, and, meantime, here in the real world, we've got an election to win.

Yes, we support the reelection of Barack Obama. No, we don't like the drone attacks, the failure to close Guantanamo Bay, the maddening tendency to compromise. Obama is the centrist we predicted he would be when we supported his main opponent in the Democratic primary battle of 2008. On balance, though, he has been a good president in a difficult time, despite the ineffectiveness of his own party in congress and the extremism and intransigence of the opposition party in congress. His economic policies, though not as progressive as we would like, have helped the country navigate the Great Recession far better than the austerity policies that have brought such pain to Europe in the last few years. His health insurance reform, modest as it is, is a necessary step toward the recognition that healthcare is a fundamental right, not a privilege.  His picks for the Supreme Court, Justice Sonia Sotomayor and Justice Elana Kagan, show an admirable commitment to diversity and to the Constitution as a living, breathing, socially and historically situated document. On social issues, he has proven to be genuinely progressive, though his political cautiousness has sometimes made him slow to show it. Still, his decision to come out in support of same-sex marriage in an election year was a brave one, and we commend him for it. We hope he will continue to show courage and use the bully-pulpit of the presidency to lead the country in the direction of hope rather than fear and toward the expansion of rights and opportunities for all citizens.

Also: We like his dog, his wife, his daughters, and his singing voice. We'd much rather spend the next four years hanging out with all of them rather than this robot fascist dog abuser guy. In Roxie's World, the dogs ride inside and the Moms vote Dem. You, too? Go here. Give money. Dude's gonna need it. Peace out.
Posted by Roxie Smith Lindemann at 6:07 PM