In Praise of Incrementalism

At some point in grad school, Moose acquired a postcard that has been on a bulletin board in one of her offices or another ever since. It must capture a popular sentiment, because thirty-ish years later the card is still available on the interwebs. Here 'tis: 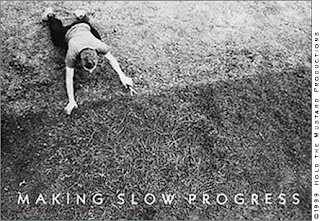 Moose has shown this image to generations of students slogging their way through the often torturously slow process of researching and writing a dissertation. It's an image that pops into her head every time she hears some pin-headed administrator shriek about the urgency of reducing time to degree, as if doctoral programs were assembly lines that could crank out PhDs as efficiently as Detroit once cranked out cars. It's an image that also seems relevant to the story that has rocked public higher education over the past couple of weeks, the ouster of Teresa A. Sullivan as president of the University of Virginia just two years after being unanimously elected to the post by the university's Board of Visitors. Though details of what led to Sullivan's forced resignation remain murky, Board Rector Helen Dragas and (now former) Vice Rector Mark Kington, who spearheaded the move to dump Sullivan, clearly felt the new president wasn't moving quickly enough to make changes they felt were needed, particularly with regard to online education. When Sullivan addressed the Board eight days after her resignation was announced, she offered a full-throated defense of her record and leadership style:


I have been described as an incrementalist. It is true. Sweeping action may be gratifying and may create the aura of strong leadership, but its unintended consequences may lead to costs that are too high to bear. There has been substantial change on Grounds in the past two years, and this change is laying the groundwork for greater change. But it has all been carefully planned and executed in collaboration with Vice Presidents and Deans and representatives of the faculty. This is the best, most constructive, most long lasting, and beneficial way to change a university.  Until the last ten days, the change at UVA has not been disruptive change, and it has not been high-risk change.

Corporate-style, top-down leadership does not work in a great university. Sustained change with buy-in does work. UVA is one of the world's greatest universities.

Being an incrementalist does not mean that I lack vision. My vision was clearly outlined in my strategic vision statement. It encompasses the thoughts developed by me and my team as to what UVA can become in the 21st century and parts of it were incorporated into the budget narrative that you adopted last month.

Sullivan may yet end up retaining her position, which, in our humble opinion, would be about the coolest thing to happen in higher ed since the invention of the three-ring binder (in 1886).  However it resolves, this kerfuffle is well worth the amount of time, attention, and brilliant. satirical. energy it has taken up lately. (The Chronicle of Higher Education has an excellent archive of coverage of Sullivan's ouster and the aftermath, just in case you've been under a rock and need to get caught up. To its credit, UVA also has an archive of official university responses and news coverage.)

The intensity of the reaction on Grounds, as they snootily quaintly say in Charlottesville, and the fury directed at the BOV's lack of transparency (not to mention decency) have been encouraging and inspiring to those of us who have been chafing for years under the yoke of the "corporate-style, top-down leadership" that has come to dominate so many campuses. Sullivan's direct assault on that model in her statement to the BOV is surprising only because most high-level campus administrators are sufficiently drunk on corporate Kool-Aid that they rarely speak unvarnished truth in public. We're accustomed to hearing such critiques from cranky bloggers and other malcontents, but university presidents these days are cheerleaders whose relentless happy talk in the face of budget cuts and declining wages for faculty and staff demonstrates that they are far more interested in protecting the brand than in telling the truth. Sullivan's defense of incremental change, achieved through deliberate, consultative, and collaborative processes, is a slap in the face to a board that operated largely in secret and seemingly on impulse in reaching one of the most consequential decisions within its power to make. It is also, however, a stirring reminder of how, ideally, universities operate. Presidents, though they are hired and fired by corporate boards, are faculty members, too. They may be perched atop their campus's administrative hierarchy, but the principles and mechanisms of shared governance mean that they are also accountable to those they lead. They can't succeed without buy-in from those further down the chain of command.

Our blog boyfriend Chris Newfield argues, in an otherwise flawless analysis of the UVA debacle, that Sullivan erred in "describing her collaborative method as incremental and conservative. This kind of rhetoric allows the Board to define her as slow and inadequate in a time of rapid change, and to justify executive authority as that which is bold and decisive." Newfield is right that we "cannot afford any longer to allow academic work and administration to fall into the innovation trap, which casts as anti-innovation anyone who appears to oppose innovation as defined largely by information technology corporations in their equally turbulent and oligarchic markets." He's also right that we should "concede nothing" to management twits and should make the case that "forms of reciprocal and relatively egalitarian collaboration generate richer, deeper knowledge and more creative and robust solutions than does the thin knowledge and compulsive changes of tack of externally-focused managers who respond to the influence that seems most powerful at a given moment."

All true, but there is still joy in Roxie's World over Sullivan's unapologetic embrace of the term incrementalist. Our own campus is filled these days with ear-piercing calls for innovation and entrepreneurship. We've had a number of conversations recently about the importance of laying claim to those terms and making sure that the work we do and the values we cherish don't get lost in the race to prove that universities are all about what is new and cool and innovative and revenue-generating. In our view, the tougher yet deeply important challenge is to insist that incrementalism and innovation are not necessarily opposing terms. We need both on campus, and we shouldn't be shy about saying so. Universities are and always have been engines of innovation. All that hoo-ha about what goes on in our laboratories, hospitals, and performance studios isn't just hoo-ha. It's an accurate description of the incredibly bold, original, world-transforming work that goes on at research universities every day. At the same time, incrementalism is a deeply ingrained aspect of academic culture, perhaps because it is a deeply ingrained habit of the academic mind. We may be innovators, but we are also scholars. We tend to be deliberate and studious, not reluctant to change but not impulsive about it either. We are accustomed to working through mechanisms of review that can take months and even years to conclude.

Yes, we are tempted at times to echo the impatient Miranda Priestly's sardonic, "By all means move at a glacial pace. You know how that thrills me," because the wheels of university bureaucracies do grind slowly and can be an impediment to needed change. On balance, though, incrementalism works, both to subject ideas to rigorous examination and to include more rather than fewer voices in a collaborative process of change. Such processes may move relatively slowly, but they reduce the risk of an outcome as devastating to morale and reputation as, for example, the impetuous move engineered and approved by too few members of UVA's Board of Visitors a couple of weeks ago. Rector Helen Dragas's declaration that "the days of incremental decision-making in higher education are over, or should be" sounds hollow, self-interested, and just plain wrong-headed in light of the damage done to the institution by her callous, hasty judgment and corner-cutting maneuvering. Whatever happens to President Sullivan or Rector Dragas, Mr. Jefferson's university will be years recovering from the wholly avoidable catastrophe of the past two weeks.

In some sense, supporters of public higher education should be grateful for what has transpired in Charlottesville in recent days. It has been extraordinary to watch as faculty, students, alumni, and the campus senate rose in defense of their leader, their institution, and a "community of trust" that they see as having been violated. We can all learn from these powerful examples of passionate yet mostly respectful dissent. It has also been fascinating to watch the various players make their claims to UVA's illustrious founder as the drama has unfolded. Few institutions are as vitally connected to a founder and his legacy as UVA is. You believe it when a news story gushes that "students refer to . . . Thomas Jefferson as if the third U.S. president were a close friend." You feel a pang of envy and try to imagine who, in a similar crisis, members of your own campus community might turn to for inspiration and advice. The segregationist football coach/president for whom the stadium in the middle of campus is named? Probably not. The famous alum whose most significant recent accomplishment appears to be having served as a judge for the Miss Universe pageant? Tempting, but no. Then it hits you: If you need a defender of incrementalism, then you're lucky to be on a campus covered with turtles. Slow but steady wins the race, dudes.

Paws up to all our pals in Charlottesville, who have worked so hard and righteously to marshall support for the cause and share the local angle on the story. Your teachable moment has taught all of us who care about higher ed a lot about how to organize and communicate in the midst of totally unexpected turmoil. We stand with you and wish you well in your struggle. Peace out. 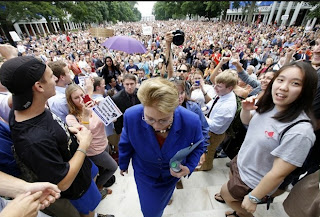 (From WaPo: 6/18/12. University of Virginia President Teresa Sullivan makes her way up the steps of the Rotunda to address the Board of Visitors closed meeting. Norm Shafer, Washington Post)