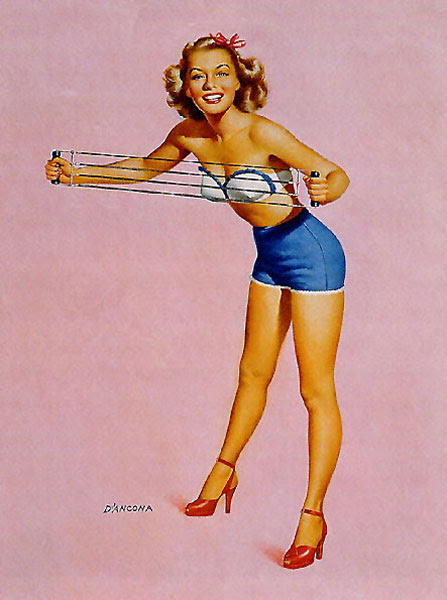 If Jane Fonda were an academic blogger, she'd be feeling the burn(out) right now. The signs of it are everywhere -- and here, in this little blog, which has sounded a lot like this lately:

The few proffie types who are blogging are blogging about how hard it is to blog right now, and comment threads are exploding with confessions and doubts and explanations and exhortations -- all signs of a veritable virtual existential crisis. Who are we? Why are we doing this? Why don't we stop? How can we keep going? Is it a seasonal affective disorder that temporarily has us in a funk? The school year is winding down, after all, and we are all overwhelmed with the madness of the academic spring. Or is something deeper going on? Are we coming to a fork in a road or -- perish the thought -- to the end of some line we've all been riding -- writing -- individually and collectively? Sorry to go all blog-apocalyptic on you, but you know something serious is going on when you see our dear (though unmet) friend Historiann casually declaring in a comment over at Undine's that she is "out of ideas."

Srsly, girlfriend? You? Matron saint of academic blog sass and savvy? Who for nearly five years has posted so regularly that we figured you were knocking back some secret blogger's equivalent of Metamucil out there in the high desert? Out of ideas? Cowgirl, that's like saying the ocean has run out of water. Or, to choose a metaphor more appropriate to your style and sensibility, that's like saying there ain't no ponies left in the corral worth saddling up and riding out. There's plenty of fine ponies left, Historiann, and we bet you'll get your giddyup back just as soon as the dust settles on the semester and  you have a chance to take a good look at the corral again.

For the record, here's part of what I had to say over at Undine's on the subject of whatever kind of crisis might be going on in the blogging community of which we are a part:


I think blogs (and bloggers) go through energy crises as well as identity crises. My blog has wrestled some with identity issues ever since I complicated our narrative set up by dying. (Hey, I say to my typist, you think it sucks for YOU? Being dead is no fun for me, ya know!) Recently, the energy crisis has been more relevant. My typist has had an insanely busy academic year. Her commitment to Lifestyle Adjustment also means that she's less willing to sit in a chair trolling the interwebs for pretty pictures or stuff to get pissed off about. If forced to choose -- and she often is these days -- she'll sometimes choose to go for a run rather than work on a post. As a result, posts at my place have gotten shorter and less frequent in recent months.

Like Crazy, we're not thinking of shutting down, though the thought has crossed our minds. Still, our small but devoted band of readers sticks with us and we enjoy their company. We'll keep keeping on, one way or another.

We have noted before that blogs have life cycles. They come and go as bloggers' lives and interests change. We try not to get too caught up in the temptation to make Grand Proclamations about Technology, Communication, and the Future of Civilization every time some new social media toy comes along that is so much cooler, funner, faster, and easier than blogging. The question for us remains what it has always been: What is the best tool for any particular communicative/strategic goal? How can we say what needs saying and maybe throw in some eye candy and a joke or two?

Still, if we were prone to speculate, we might say that academic blogging that is not strictly speaking academic -- i.e., not directly related to developing or promoting a scholar's research -- may be under unusual pressure these days from at least two sources. One is the stress all workers in higher education feel from the labor conditions endemic to the regime of Excellence Without Money (™RW Enterprises LLC): stagnating or declining wages, increased work loads, rising insecurity due to the erosion of tenure. A lot of academic blogging that isn't strictly speaking academic arose in response to such conditions. It has served as a valuable means of sharing knowledge and building alliances across institutions, but those who produce it must do so during their incredible shrinking "leisure" time. We began blogging because it was fun and fascinating -- and when I say "we" I mean my typist, who has tenure in a Research 1 school and has been splitting her time between teaching and directing a small (i.e., resource-starved), interdisciplinary program for the past ten years. As mobile technologies have blurred the lines between work and leisure time and administrative demands proliferate in the age of No Dean Life Behind, few academics ever feel that they are not in some sense at work. How do you blog when the tool you would use to do it also holds all those reports you ought to be writing, all those e-mails someone thinks you should be answering?

Another source of pressure on bloggers arises from the fact that even as academic standards are slowly shifting to acknowledge the realities of a post-print culture that is producing "new venues for research, communication, and the creation of networked academic communities" (yay, MLA!), blogging is still devalued as a non-serious product of the non-peer reviewed internets. Bloggers aren't "builders" and so rank low on the hierarchy of values Stephen Ramsay constructed for the field of digital humanities early in 2011. Stanley Fish is so contemptuous of blogging that he makes a public spectacle of his resistance to acknowledging he himself is doing it, even from the lofty perch of The New York Times rather than down here with the riffraff of Wordpress and -- horrors! -- Blogger:


This is a blog. There, I’ve said it. I have been resisting saying it — I have always referred to this space as a “column” — not only because “blog” is an ugly word (as are clog, smog and slog), but because blogs are provisional, ephemeral, interactive, communal, available to challenge, interruption and interpolation, and not meant to last; whereas in a professional life now going into its 50th year I have been building arguments that are intended to be decisive, comprehensive, monumental, definitive and, most important, all mine.

Oh, it sucks to be you, doesn't it, Mr. Fish? Denied monumentality, stuck in this icky, ephemeral, interactive space filled with ugly words and pajama-clad wiseacres with the audacity to disagree with you. Yeah, you're just one low-rent cat video away from realizing that you, too, are free to go yet immobile in the realm of the provisional. Deal with it, Stan.

Everybody hates blogging, it would appear. Fish hates it for lacking "authority" and "disciplinary power." Ramsay turns up his nose because blogging isn't "making anything." Really? "Build, therefore, your own world," Emerson urges in Nature. Moose says that's what she set out to do in establishing this quirky little outpost in the blogosphere. Haters gonna hate, of course, but she still thinks it's one of the coolest things she's ever built, and she doesn't much care if it fits into anybody's system of rewards.

Burned out? Maybe a little. Fading away? Never, darlings. We're here for you, in bits and pieces and in the moments we manage to steal away from all the things we are supposed to be doing. How deep is our love? It's 12:57 on a Tuesday morning, and we are about to press "Publish." For you, my pretties. Because we belong to you and me, don't we? Of course we do. Peace out.
Posted by Roxie Smith Lindemann at 12:57 AM