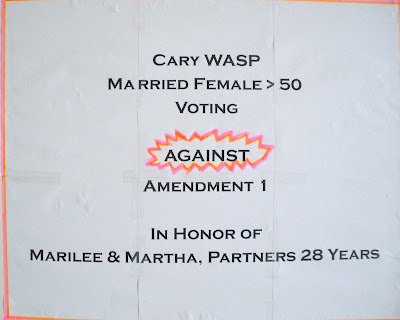 Who's Cary WASP, I hear you muttering from behind your computer screens, and what does she have against Amendment 1? Cary WASP (not her real nickname) is the Older Sister of the Moosians. She lives in Cary, NC (Cary -- Get it?), and she is not in the habit of making signs and carrying them around at festivals in the rain, but she did so Saturday because she is a good sister and a good citizen and she knows the simple truth that there can be no classes among citizens. Amendment 1, like all attempts to grant legal rights and protections to some relationships and withhold them from others, is discriminatory on its face. Since same-sex marriage is already illegal in North Carolina, Amendment 1 can't even be justified on the usual stupid grounds of preserving the sanctity segregation of marriage from teh gayz. It goes further, banning any type of "domestic legal union," including civil unions and domestic partnerships.

Yo, Carolina, want to protect marriage? How 'bout making sure this creep never gets a license to wed again? (Cheap shot, I know. Couldn't resist. But, still, srsly.)

The amendment seems likely to pass, despite the efforts of Cary WASP and Bill Clinton, who puts on his sweetest, thickest southern drawl in these charming robocalls that are going out in the state in advance of Tuesday's vote.

Thank you, Cary WASP, and thank you, Big Dawg, for fighting the good fight for equal justice under law. We'd be proud to march with you any day, rain or shine, win or lose. Some days, if you can't be on the winning side, you console yourself by knowing you are on the right side. March on, dream on, fight on, my pretties. And if you live in North Carolina, for dog's sake get out and vote on Tuesday! Peace out.
Posted by Roxie Smith Lindemann at 1:00 AM