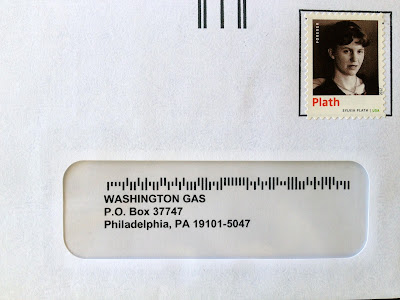 We're thinking you don't have to be an English major to spot the irony in the above photo. Moose was paying bills this morning and by sheer coinkydink ended up slapping the Sylvia Plath stamp on the gas bill. (Yes, children, Moose still pays the utility bills with paper checks, tucked into envelopes and placed outside for the postal person to pick up and stuff into a large leather bag. She's old fashioned. Don't judge.) When she realized what she'd done, she showed it to Goose and they had a good long guffaw, which they like to think Plath herself would have understood.

Not sure if there are any ironies in putting Elizabeth Bishop and Wallace Stevens on the phone bills, but, hey, we are grateful to the U.S. Postal Service for getting the faces of ten great twentieth-century American poets into general circulation. Who knows? Maybe some dutiful, bill-paying citizen will get curious enough about the beguiling face of the pretty young woman on the stamp to go read one of her poems. Something delicate and dainty like, you know, this one. It could happen!

Enjoy your weekend, lovelies. May you find unexpected blog fodder and reasons to laugh wherever you go, whatever you do. The papers will be graded soon, my typist assures me, and we'll get back to something approximating regular blogalicious programming in the very near future. Honor bright. Meantime, if you're in the DC area, you should head downtown tonight or tomorrow to spend some time with this extraordinary 360-degree projection experience by Doug Aitken at the Hirshhorn. The Moms swear it's the coolest, most un-Washington thing they've seen in more than a quarter century of living in the national capital area. Go after dark. Tomorrow is the last night.

Peace out, and don't forget to pay your bills. 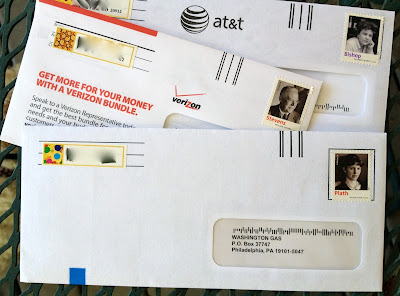