Wednesday night at QTU, Angela Davis spoke to a huge, rapt audience on a range of topics, including the killing of Trayvon Martin, Americans' resistance to seeing racism as a structural problem, and the cause of prison abolition. (You can watch the whole event here.) The Moms were in the house and on the second row, which gave Moose a chance to snap this shot of the scholar-activist listening attentively to a question from the audience: 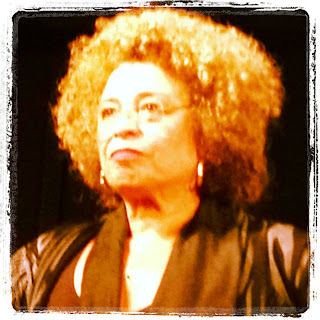 Friday, as many of you know, was the day of the big gay spring carnival Moose's happy little program hosts every year on behalf of DC Queer Studies. This year's symposium was extra special, focused on honoring the life and legacy of writer/critic Samuel R. "Chip" Delany, who turned 70 on April 1. The day was drenched in sunshine, the papers were uniformly splendid, and the guest of honor was genial, generous, and wise. Moose snapped this shot of Delany getting ready to read from his new novel, Through the Valley of the Nest of Spiders: 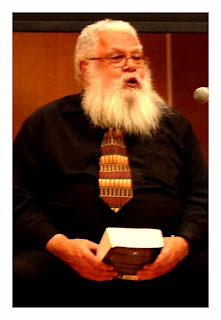 What's the takeaway from this long, exhausting, yet deeply gratifying week? Maybe it's something as simple as the importance of finding work that feeds the soul and keeps one focused on a world larger than oneself. Both Davis and Delany have spent their lives as writers and scholars engaged with questions of race, sex, and justice, and both seem, at 70 or on the brink of it (Davis is 68), to radiate equanimity and an optimism that seems not naive but hard-won and fiercely guarded. At breakfast with a group of faculty women the morning after her lecture, Davis amiably entertained more than 90 minutes of questions on everything from prison reform to the politics of university catering. She was thoughtful, funny, generous, and sanguine about the prospect of continued, if slow, progress toward justice. She counseled patience and emphasized the importance of building movements from the ground up. She reminded listeners that the election of Barack Obama was a victory not for him but for those who voted him into office. She feels that the Occupy Wall Street movement, whatever else it did or did not accomplish, was a sign that citizens felt empowered by Obama's election to mobilize against rising inequalities of wealth and the rise of corporate power. In reply after reply, it was clear Davis refuses despair. She sees what's happening. She grasps the underlying problems with depth and nuance. And her years in the trenches tell her that it simply means we are all going to have to spend a few -- or many -- more years in the trenches. All right, then.

Look, darlings, I know it isn't always possible to find work that feeds your soul. Indeed, sometimes, to pay the rent and stay alive, you have to take jobs that make you worry you are selling or crushing your soul. You may find yourself in the devil's company, on your knees and on his payroll, but that doesn't make you a devil. Sometimes you do what you have to do -- but you do it without losing sight of what you want to do. You'll get there, my friend. Take the long view, as Davis and Delany have clearly done in the course of their own complex, amazing journeys. Keep your eyes and your heart open. You might have to do a little more than click your heels together three times, but you will get to where you want to go, even if it isn't on any map you've ever seen. Don't ask us how we know. We just do.

We'll end with what is perhaps Moose's favorite image from this picture-perfect week, because it celebrates not only longevity but clever design that tastes as good as it looks. Here is the cake she had made to honor Mr. Delany at the party after Friday's symposium. It's decorated with the image used on publicity for the event: 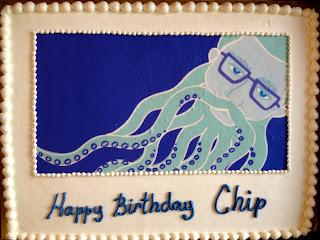 We offer a virtual piece of this pretty cake to one and all, as a way of saying, "Eat, laugh, never give into despair. That's the one thing we truly can't afford." Peace out.

For Will Danger, who is working.
Posted by Roxie Smith Lindemann at 5:35 PM