As you have no doubt heard by now, another shero has left the building. The poet Adrienne Rich, whom Moose has lovingly described as the fairy godmother of lesbian feminism, died last Tuesday at her home in Santa Cruz, California. Tuesday, you may recall, was Moose's birthday, which adds an extra bit of poignance to the loss here in Roxie's World. Rich was only 82 years old. Only -- Yes, children, 82 sounds kinda young to the ornery 50-somethings who hang out here. Someday, you'll feel the same way. Swear to dog.

What can we say about Rich that others haven't already said in the outpouring of praise and sorrow that quickly followed news of her death? Simply that her poetry was and is, like certain pieces of music, part of the soundtrack of our lives. It is lodged deep in our heads and hearts. Lines come to us unbidden, in sleep, in crisis, in moments of intimacy. Whatever happens with us, your body will haunt mine. . . .I came to explore the wreck. / The words are purposes. / The words are maps. / I came to see the damage that was done / and the treasures that prevail. . . .With whom do you believe your lot is cast? 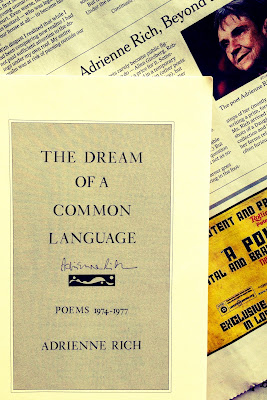 The collage above features the autographed title page of Moose's well-worn copy of the book dykes of a certain age all had on their shelves in the 70s and 80s alongside their well-worn copies of Our Bodies, Ourselves and The Moosewood Cookbook. You couldn't get dates back in those days if you couldn't quote most of the "Twenty-One Love Poems" from memory. While changing the oil of your girlfriend's car. Or holding a mirror up to your vajayjay in a circle of your closest friends. (Closest friends: That's lesbian-speak for ex with whom I am still complexly entangled or chick I am hoping to sleep with next.) Just kidding, kinda.

Moose isn't quite sure when she got Rich's autograph on the sacred text. She thinks it must have been at a reading at Womanbooks in New York (which is discussed in this totes excellent Signs article by Kristen Hogan on women's studies and feminist bookstores), when Rich was promoting her next book, A Wild Patience Has Taken Me This Far. Yeah: Fall 1981. Moose was the scraggly grad student standing in line clutching the poet's previous book, which she had gotten as a gift from one of her closest friends. She eventually got around to purchasing A Wild Patience and writing a paper comparing it to Dream, because she took a course called Theories of Female Creativity and you could get by with that sort of thing as long as you threw in a dollop or two of French theory to make it all look legit.

Did you really expect this post to be about Rich? Here, let's try again.

We needed a fairy godmother, someone whose words had the power of incantation and a wisdom that seemed ancient. We needed that to counter all the voices in and out of our heads shouting "No!" to our every desire, our dreams, our ambitions, our longings for another kind of world. Rich was important because she gave voice to those dreams, even as she demanded that her readers attend to the world

For all the dreamy feminist utopianism of her lush lyricism, Rich always had a foot firmly on the ground of the world "as it is." Yes, she gave us permission to revel in the joys of erotic pleasure and outlaw love, but she also reminded us that the world was always with us and those private pleasures couldn't command all our energy and attention. In the nineteenth of the twenty-one love poems, the speaker reminds her beloved, "I told you from the first I wanted daily life, / this island of Manhattan was island enough for me." The remark is in parentheses, a graphic emblem of the tensions between separateness and connection that are the subject of the final poems in the sequence.

You hear in that "I told you from the first" something of the moral rectitude that could make Rich both annoying and bracing. She was capable of a prescriptivism that could be damaging to both politics and poetry -- and wrote about that risk in poems like "North American Time":

What felt like righteousness, though, was also a consciousness of privilege and of the duties Rich obviously felt as a white, North American, middle-class woman to make use of the power she had to try to effect change. You could say she exaggerated the amount of control women had over their lives, as she seems to do in a line like, "Only she who says / she did not choose, is the loser in the end" (XV, "Twenty-One Love Poems") -- Or you could say she recognized that no amount of oppression ever let one off the hook. We are all to some degree responsible for our lives and accountable to our moment in history -- "the life of your tribe / the breath of your planet," as she puts it in "North American Time."

Adrienne Rich gave voice to our dreams, and she demanded that we work to make those dreams real. Rich has moved on, too soon, alas, but the work, of course, continues. We realize now it isn't just women's work, as we might have supposed in earlier, separatist moments. It's all our work, and we'd better get to it. Because somewhere, we might imagine, Rich and her friend and sister/warrior Audre Lorde are impatiently waiting for us "to perform the needed acts" ("Toward the Solstice"). Let's get started, shall we?


* * *
For other remembrances of Rich, see Katha Pollitt in The New Yorker, our pal Margaret Swedish on her writing blog, another pal over on Gukira, and a poem by Marge Piercy on the Ms. blog.
Posted by Roxie Smith Lindemann at 11:58 AM