Newsflash: NJ Gov. Chris Christie is still fat -- and it is driving some people right over the edge of decency and sense.

Consider this a postscript or an update to the post we did Friday on the heaping helping of fat hatred the Washington Post dished up in its coverage of speculation about whether Christie would enter the 2012 presidential race. Somehow, in our careful research for that post, we managed to overlook the truly appalling display of fat eliminationism posted on Bloomberg earlier in the week by Michael Kinsley (H/T). I kinda hate linking to the Kinsley piece, but it seems important to let you see for yourselves just how comfortable he is asserting that a public servant's size is in and of itself disqualifying for higher office. Why? Well, Kinsley says, because being overweight shows a lack of discipline, and "a presidential candidate should be judged on behavior and character, not just on policies." Also, presidents  set an example for the people they lead and serve as a symbol for the U.S. around the world. Fat people make bad symbols -- unlike, you know, torturers and obstructors of justice.

Here's the thing, kids: We're not wild about the term "fat eliminationism," which feels designed to shut down any kind of conversation about weight's relationship to overall health. We think those conversations need to occur. In this instance, however, the term is appropriate, because Kinsley is so unbelievably harsh and unabashed in his judgments. He has no qualms about insisting that fatness is disqualifying at the presidential level, blithely asserting that even fat people hate fat people ("Most overweight people hope to be thin eventually.") and that Christie could lose weight if he put his mind to it ("Controlling what you eat and how much is not easy, and it’s harder for some people than for others. But it’s not as difficult as curing a chemical addiction.").

The Recently Overweight Person of Roxie's World has a message for Michael Kinsley: Shut the frack up. What in dog's name made you think this was a column worth posting? It is worse than worthless as political analysis, dripping as it is with a mean-spiritedness, condescension, and -- there is no other word for it -- hatred toward those whose size you deem to be excessive. It offers nothing of value to our understanding of either politics or health. You are not a doctor, and you don't seem to have direct knowledge of Chris Christie's metabolism or genetic makeup. The last thing fat people need is one more finger-wagging thin person telling them that if they are not willing to lose weight they should just get their fat bodies out of sight. Mr. Kinsley, you are so not helping people of any size with this kind of clap-trap. So, well, you know . . . 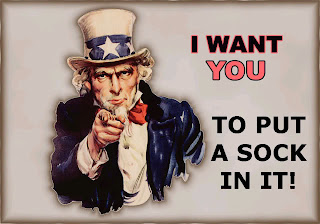 (Image via.)
Posted by Roxie Smith Lindemann at 9:23 PM